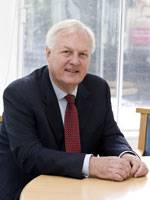 Philip Sturrock joined UCL Council following the merger of with the Institute of Education in December 2014 and was Treasurer from January 2017 to March 2019. He was formerly a member of IoE Council and Chair of its Finance and General Purposes Committee. He read Modern History at Oxford and has an MBA from the Manchester Business School.

Mr Sturrock’s professional career has been in book publishing. He has been CEO of IBIS information Services, Pitman Books, Routledge, Cassell and Continuum. In 1994 he led the IPO of Cassell on the London Stock Exchange before selling it to Hachette in 1998.

Following his publishing career he has been Chair of the United St Saviour’s Charity in Southwark, Chair of the Wandle Housing Association and Chair of Governors at Queen Mary’s Grammar School in Walsall. In addition he has been a member of the Industrial Development Advisory Board at the Department of Business and the Investment Panel of the British Business Bank. He is a Trustee of the Southwark Cathedral Development Fund, having lived in Southwark before moving to Dorset.

In the Queen’s Birthday Honours of 2014 he was appointed MBE for “services to business, charity and community in SE London.”