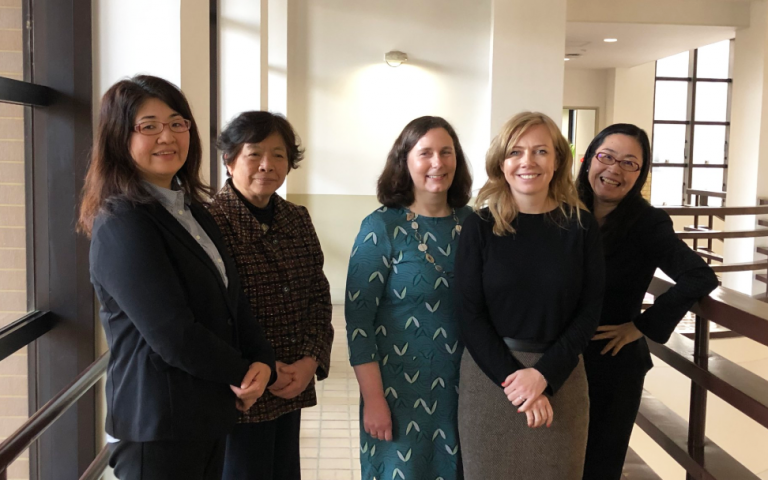 Earlier this month, UCL and Tohoku University launched a joint project to explore how universities can improve gender equality in higher education. To kick off the initiative, Tohoku hosted a series of events led by Professor Noriko Osumi, the university's first female vice president, and attended by UCL staff including Professor Sara Mole, the Provost's Envoy for Gender Equality at UCL.

Some 30 researchers and leaders of diversity networks attended a roundtable at Tohoku on 1 March, during which four women presented their research, spoke of their experiences and shared learnings from their respective institutions.

Hisako Ohtsubo, a senior researcher from Nippon University, presented her work on the Gender Empowerment Measures in Science and Technology, an index in Japan that tracks the changing trends of women in academia.

According to her study, the number of female researchers in Japan has been increasing, although the ratio of female to male researchers remains low. To further promote gender equality, particularly in STEM fields, Ohtsubo's team has been focused on addressing unconscious bias.

Professor Mole and Fiona McClement, UCL Director of Equality, Diversity and Inclusion, delivered a presentation that touched on unconscious bias, in which Fiona spoke of fostering a "positive cultural climate where no-one will feel compelled to conceal or play down elements of their identity for fear of stigma."

To that end, she said, UCL values the diversity of contributions when considering promotion and recruitment, and holds training workshops to address issues such as implicit bias, bullying and sexual harassment among staff and students on campus.

Both UCL and Tohoku University were the first universities in their countries to admit women over a century ago. The two institutions hope that by identifying best practice, the initiative has the potential to be a catalyst for change, not only within the higher education sectors in the UK and Japan, but more widely.

UCL was one of the first universities to sign up to the Athena Swan charter, which recognises and celebrates good employment practices for women working in higher education and research and in 2015 it received its first Silver Athena SWAN award. UCL’s actions to address gender inequality have also been recognised by the range of Bronze, Silver and Gold awards the university has received at departmental level, particularly in STEM departments.

Tohoku has also taken a number of stops to address gender inequality at the university. Since 2006, for instance, the Science Angels programme has given female researchers at Tohoku University the opportunity to network with other women in academia.

Commenting on the universities’ joint initiative, Professor Mole said: “It’s exciting to be collaborating with colleagues at Tohoku and it’s highlighted how important it is to share experiences so that we can raise awareness of how to tackle the problem of gender discrimination.

“Having learnt over the last decade what has had most impact for UCL and the benefits this has brought us as an institution, we are now committed to sharing this with national and international colleagues and partner institutions.”

Professor Osumi, Vice President for Public Relations and Promotion of Diversity at Tohoku University, echoed this sentiment. She said: “The workshop we hosted at Tohoku University gave us a great insight into how the UK is addressing gender equality in higher education through national schemes such as Athena SWAN. It was also an opportunity to learn from UCL’s successes.

“My wish is to see universities become more creative and innovative through supporting greater diversity. I look forward to working with UCL colleagues to ensure that gender equality is an achievable goal for the future.”