Dr Paroj Banerjee (The Bartlett, UCL Faculty of the Built Environment) used the Global Engagement Funds to understand how the governance of the Covid-19 pandemic impacted unhoused people in Mumbai. 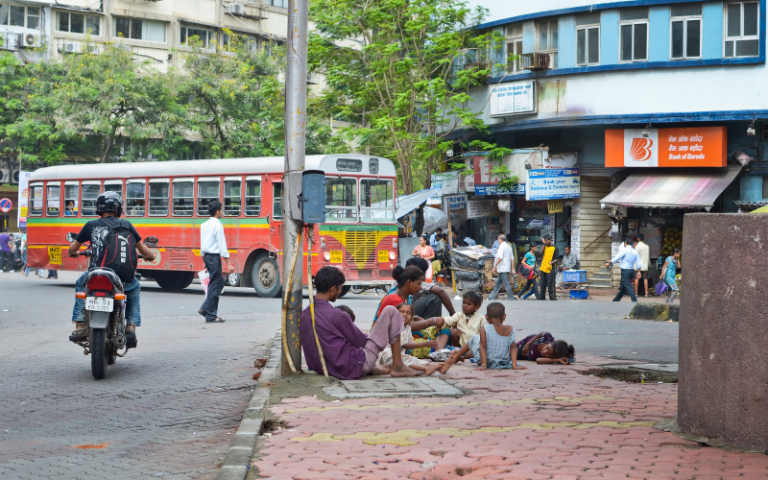 In India – much like the rest of the world – people were told to stay indoors to be safe during the Covid-19 pandemic. Governance that focused on this spatial containment and economic regulation – such as people working from home instead of offices – made assumptions about both the nature of ‘home’ and ‘work’. For the unhoused population of Mumbai, many of their homes do not have four walls and a roof. Furthermore, their work in the informal labour market relies on them being able to go out to earn money for survival.

To understand these issues better, UCL collaborated with the Tata Institute of Social Sciences (TISS) in Mumbai, as well as grassroots organisations and NGOs based in Mumbai. The focus of the project was to look at how the policies and governance of the pandemic impacted unhoused populations in Mumbai, and the knock-on effects of these policies. The team also worked with housing activists, policy makers, civil society and NGOs to further understand the impact of policies. The ultimate aim of the project was to understand the options for a fairer way of governing all people in similar situations in the future.

Policies that excluded the unhoused

“My research focuses on poor urban inhabitants who live in open spaces,” explains Paroj. “They’re commonly referred to as ‘homeless’, but I purposely don’t use this terminology, because every time I speak to these groups, they say the spaces in which they live are their homes. So I use the broad term ‘unhoused’. The way of life for these people was totally disrupted during the pandemic, which was the basis for this project.”

The narrative of the governance of the pandemic in India focused on being indoors to stay safe. This approach relied on the idea that people had a structure with walls to call ‘home’, and that employment takes place inside. “It gave a very dominant and oppressive idea of ‘home’ and structures that not everyone fits into,” says Paroj. “Anyone who didn’t fit was rendered out of the protection measure.”

Those who didn’t comply also faced police brutality, according to the research participants Paroj engaged with. “As a research team, we were looking at how these policies designed for safety, actually made it unsafe for people living on the streets,” she said.

Covid-19 as an issue for Mumbai’s unhoused population

One of the findings of the research was that the pandemic made attitudes towards the unhoused even more stark. Already stigmatised in urban India and viewed as outsiders, the pandemic exacerbated this perception, as the unhoused were also characterised as being carriers of the disease. Even though the pandemic was happening across the world and initially spread through the international travel of wealthier individuals, Mumbai’s unhoused were viewed as a problem relating to the spread of Covid-19.

The pandemic also highlighted how India had fallen behind on its targets to provide a specific amount of shelters for unhoused populations in cities. There was subsequently a rush in some areas to provide temporary shelters to get people off the streets. However, it was enforced in some places in a very strict way, which led to families being separated.

And although people across the world were worried for their health during the pandemic, Mumbai’s unhoused population were more concerned for their day-to-day survival. “Covid-19 was never a health issue for Mumbai’s unhoused,” says Paroj. “It was always an issue of loss of livelihood, food, lost networks, and facing police violence.”

Changing perceptions of the unhoused

Paroj is keen that the work the research team has done so far will help to drive change. “We don’t want the project to be solely academic in nature,” says Paroj. “We want it to feed into policy and activism. In fact, one of the key members of the research project was Brijesh Arya, founder of Pehchaan NGO, whose team worked tirelessly during the pandemic to carry out relief work. He filed a public interest litigation in the court to support the interests of unhoused groups, which included a proposal to create shelters in a planned way. “The court came out with a very problematic verdict,” said Paroj. “They said that we cannot create shelters for unproductive people in the city. That is a perception we need to strongly challenge.”

Since receiving the Global Engagement Funds, Paroj was awarded further funding from the Development Planning Unit at The Bartlett to extend the work to another two cities in India. She wants to use the research as a basis for opening up dialogue in policy circles, to understand and challenge perceptions, and to discuss the best ways planners and policymakers can approach the issue of shelters.

“The Global Engagement Funds made a substantial difference,” says Paroj. “The funding helped me create these collaborations with practitioners and people who can have an impact on policymakers. It’s created a stage where we can have these dialogues where academia and activism can come together.”