This research project is a follow-up of children at approximately eight years of age who were born in a randomised controlled trial of multiple micronutrient (MMN) supplementation in pregnancy. The research is conducted in partnership with the Mother and Infant Research Activities (MIRA) non-governmental organisation.

The research will investigate whether an antenatal nutritional intervention can lead to a difference in growth and lung function of children, and whether this difference is influenced by environmental air pollution. The project ranges from field epidemiology and environmental health to laboratory-based epigenetic research.

The main aims of the study are:

The study will be the second follow-up of a randomised controlled trial (RCT) in Dhanusha district, Nepal, in which pregnant women received either daily MMN supplements containing 15 vitamins and minerals or a control supplement of iron and folic acid.

The study aims to investigate the role of an antenatal MMN intervention in the programming of future health and disease risk factors and will explore its potential role in protecting against an environmental stressor. It performs the important function of following up the children born in a RCT to look at the long-term effects of the intervention, and has policy implications regarding the diet of pregnant women.

We aim to repeat the anthropometric measurements made in the previous follow-up, providing longitudinal information on the growth of the children. The study is powered to detect a 0.2 Z score difference in weight. The research will then go further by assessing body composition, using bioelectrical impedance, to see if differences in weight are related to a difference in fat or lean mass.

To calibrate the bioelectrical impedance measurements, a measure of total body water in a sub-sample of children will be made using deuterium-labelled water. We will also repeat the blood pressure measurement to see if a previous reduction in the supplemented group is sustained. We will perform the spirometry using ultrasound sensor technology.

We will estimate personal exposure to air pollution using gravimetric analysis of air samples in a subsample of children, from which a model will be constructed to give 24-hour time-weighted averages that can be applied to all the children. We will then be able to explore the association between the antenatal nutritional intervention and a current environmental stressor. In addition we are taking saliva samples from the children to look for epigenetic changes that may have been caused by changing the micronutrient supply to the fetus.

Following the main data collection, Dr Delan Devakumar ran a public engagement project focusing on air pollution. Air pollution in the region is mostly caused by the indoor burning of biomass fuels and is disproportionately experienced by the women of the household who do the cooking.

To help both them and us gain further understanding of the research Dr Devakumar subsequently designed a public engagement project where women from research project met with local artists to explore the issues around indoor air pollution from cooking.

Other research from the UCL Centre for the Health of Women, Children and Adolescents

Other research from IGH in Child Health

Other research from IGH in Nepal 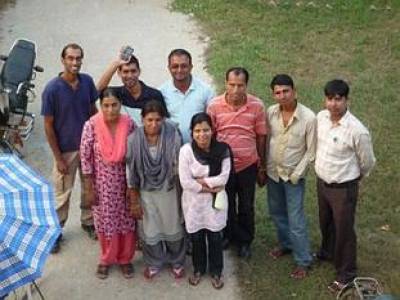