Evidence for Action (E4A) is a five year programme which aims to improve maternal and newborn survival in six sub-Saharan countries. Funded by the UK Department for International Development, it focuses on using better information and improved advocacy and accountability to save maternal and newborn lives in Ethiopia, Ghana, Malawi, Nigeria, Sierra Leone and Tanzania.

There has been little progress on reducing neonatal deaths in Africa, with the smallest reduction in rates (1%/year) globally between 1990 and 2009. Slow progress in reducing maternal and newborn mortality is linked to weak political commitment and weak accountability, both underpinned by lack of data. Maternal mortality reduction in countries across the world has always been associated with increased political focus and use of good data. In Africa, where data is generated it is often not in an accessible form for policy makers and advocates.

Accountability mechanisms are usually not strong. Over the past two years, there has been unprecedented attention to the high maternal and newborn mortality rates. Globally $40 billion has been pledged. The UN Secretary General has launched the Global Strategy for Women and Children.

Our approach focuses on better evidence, strengthened advocacy and sustained accountability. Better access to data will impact on maternal and newborn health indirectly through multiple routes. At the political level robust evidence will provide definitive credible indicators which will be publicly available. These data will inform accountability mechanisms; be used by advocates and political champions to reinforce messages and broker solutions. At the technical level, robust evidence will help foster political and strategic consensus, articulate the case for more or more efficiently applied resources, and strengthen the accountability of health professionals.

The evidence used will mostly drawn from existing sources, but some primary data may need to be collected if existing data is considered to be insufficient. In addition, there will be better systems for international accountability against agreed benchmarks. A national coordinated advocacy campaign to highlight service delivery inadequacies and celebrate improvements in health outcomes will be run in each country. Advocacy campaigns will be tailored to the local context and the type of engagement with accountability processes will be shaped by local accountability structures.

In the six countries maternal and neonatal health will become a political issue. Leaders, policy makers, managers and those providing services will feel increasingly accountable for meeting commitments and addressing service delivery inadequacies. Better evidence of where and why women and newborns are dying will be available and accessible to all. The data will reveal service delivery bottlenecks and the increased attention will strengthen the political will to address them.

Other research from IGH in Ethiopia, Ghana, Malawi, Nigeria, Sierra Leone and Tanzania 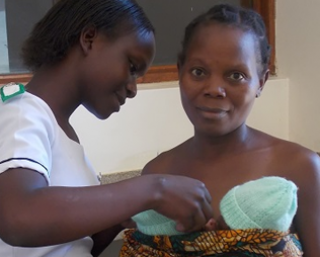