With states unwilling to significantly scale up climate ambition, what role can businesses and investors play? 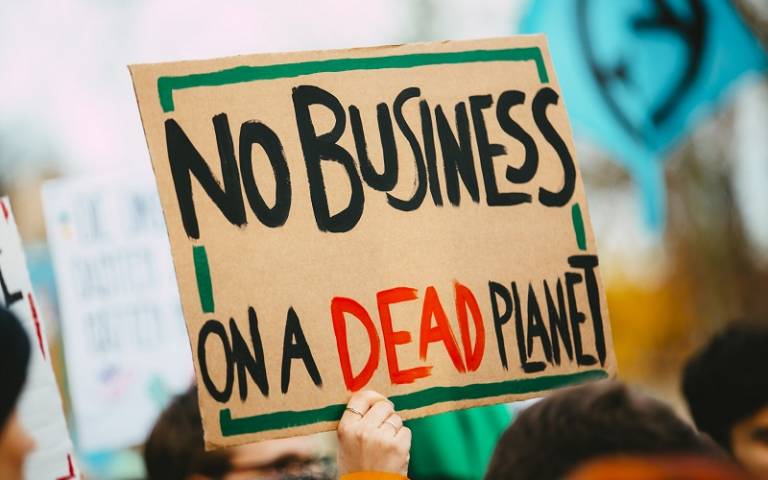 In what was the longest UN Climate Conference to date, even with the additional 44 hours to conclude negotiations, policymakers were unable to deliver any meaningful results at COP-25 in Madrid last December.  The COP process may be ‘paused’ due to the Covid-19 crisis.  However, observers of the UNFCCC process are deeply uneasy about what lays in store for COP-26, scheduled to be held in Glasgow next year.  Widespread frustration with the outcome of COP-25 is particularly acute given that it is now exactly five years since the momentous 2015 Paris Agreement, which stipulates that every five years state parties must submit new and more ambitious pledges (known as nationally determined contributions or NDCs).

Given the Madrid outcome, the much-trumpeted ratchetting up of ambition in 2020 was effectively already off the table before the world was plunged into a global pandemic. Coronavirus may be set to cause the largest ever annual fall in CO2 emissions.  However, even this precipitous decline will do little to bring the 1.5C global temperature limit within reach.  Scientific urgency is still not translating into political action.  Indeed, some governments are backtracking on earlier pledges, attempting to water down language on ambition and demanding longer time frames for NDCs, setting a recalcitrant tone for future negotiations. Alarmingly, German Watch’s Global Climate Change Performance Index, which tracks country delivery on climate policy, has decided to leave first, second, and third places vacant because no country in the world was deemed to have done anything to deserve those spots in 2019.

In contrast to the lacklustre performance of states this year, corporate leaders are increasingly sounding the alarm and mobilising to cut emissions. Demand for action within the private sector has been amplified at the 50th anniversary of the World Economic Forum 2020, which observers note effectively became a ‘climate change conference’. Stakeholder capitalism and corporate accountability to the UN’s Sustainable Development Goals was front and centre in this year’s agenda. Despite lofty claims of rapid private sector progress, Greta Thunberg struck a typically blunt and discordant note, observing that “pretty much nothing has been done, since the global emissions of CO2 have not reduced.”

Since Paris, companies have moved to position themselves as vanguard supporters of the COP climate negotiations, from a rather inauspicious beginning over two decades ago as the primary impediment to substantive progress on climate policy. COP-21 in Paris marked a watershed moment for the intergovernmental process in positioning itself as an inclusive platform for non-state actors, including companies and businesses. Many observers regard this as a necessary step, given that it is now well-established that just 100 corporations are responsible for 71% of global emissions. Without having this powerful constituency inside the tent, the chances of staving off catastrophic climate change are minimal. However, concerns persist regarding the extent of corporate influence over the negotiations, especially fossil-fuel companies and their investors. Governments continue to give mixed messages, with fossil fuel subsidies in the EU alone ranging from €39 billion to over €200 billion per annum.

In light of the COP-25 disappointment, recent initiatives by leading companies and investors are providing a breath of fresh air. In January, Larry Fink, CEO of investment giant Blackrock, called for a ‘fundamental reshaping of finance’ in an immediately infamous letter to shareholders deploring the prioritization of short-term corporate profits over the long-term future of societies. During COP-25, 177 companies pledged to align their mitigation targets with the Paris Agreement’s 1.5°C target as part of the Climate Ambition Alliance, which is committed to net zero CO2 emissions by 2050. Most impressive of all, perhaps, was a call from 631 institutional investors, with more than $37 trillion of assets under management, urging governments to phase out coal, put a meaningful price on carbon, and end fossil fuel subsidies. Finally, Microsoft pledged to go carbon negative by 2030 in recent weeks.

Yet, even with all the corporate attention, which is welcome, government are still needed, and so is the UNFCCC. While COP-25 suggested that governments may be unable to agree on a robust framework for global carbon markets, national governments and the UNFCCC can be important norm- and agenda-setters. Long-term policy visions can help avoid future ‘carbon lock-in’ if they send credible signals to businesses and investors who face strong incentives to focus on short-term performance, driven by the need to satisfy shareholder expectations. Governments also have a special capacity to ensure consistency and transparency of corporate action, for example through mandatory carbon reporting. As the examples above illustrate, many businesses and investors want governments to intervene to stabilize expectations and speed up the transition to a low carbon economy.

Regarding the future of the Conference of Parties (COP), the UNFCCC’s primary brokering medium for climate policy, there remain several critical tasks ahead. Although the COP negotiations themselves are strictly multilateral, the annual climate conferences attract growing numbers of non-state observers, including investors and representatives from business and industry. The UNFCCC is also building up institutional capacities to showcase and promote non-state climate initiatives, highlighting its potential to act as an intermediary between national governments, corporations, and citizens, ensuring access to firms wanting to lead, while helping citizens hold them accountable to their pledges. Meanwhile, governments might use the venue to continue hammering out the evermore important common accounting guidelines for sustainable value chains, GHG reporting, sustainability goals, and clean energy transitions.

While COP-25 witnessed firms, investors, and business-leaders becoming increasingly vocal about tackling climate change, the near future will soon reveal if words are followed by action. Global governance institutions remain important, however, a new era of globalization is taking shape, accelerated by the disruptive impact of Covid-19, one that appears less amenable to grandiose global agreements and more favourable to a la carte national approaches. The common thread among differentiated country-level policies will inevitably be multinational corporations, international investors, and even cosmopolitan citizens. It will be up to all three to hold the fabric of global governance together while demanding concerted action by all.