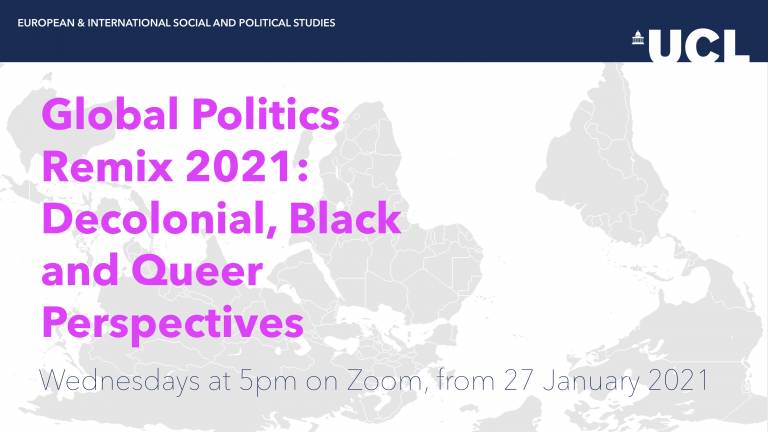 You can find the entire playlist of recordings at the following link: https://mediacentral.ucl.ac.uk/Play/Playlist/174

I will present psychological and neuroscience evidence for dehumanized perception—a failure to consider another person’s mind, and for racism—displaying a social bias based on perceived racial/ethnic groups. I will explore how these phenomena impact legal decision-making, and their role in human rights abuses. Finally, I will discuss strategies for leveraging dehumanized perception in legal proceedings to benefit the defense, and ways of mitigating the impact of racial bias in legal and policy decisions.

Dr Harris completed his undergraduate education at Howard University, USA, and received post-graduate training at Princeton University, USA. He has held positions at New York University, USA, Duke University, USA, and Leiden University, the Netherlands, before coming to UCL. Dr Harris’ research explores the neural correlates of person perception, prejudice, dehumanization, anthropomorphism, social learning, social emotions, empathy, and punishment. This research addresses questions such as: How do we see people as less than human, and non-human objects as human beings? How do we modulate affective responses to people? How do we decide right from wrong?

Based on past and current ethnographic research in the Parisian metropolitan region, I discuss how racial and ethnic minorities understand and respond to their racialization in a context in which race and ethnicity are not legitimate or acknowledged, and how a suspect citizenship is created. I will discuss how racial and ethnic minorities are “citizen outsiders” as evident of France’s “racial project” (Omi and Winant 1994), which marks distinctions outside of explicit state-level categorization. I explore not only how race marks individuals outside of formal categories, but also how people respond to these distinctions in terms of a racism-related issue, here, police violence and brutality against racial and ethnic minorities.

Jean Beaman is Associate Professor of Sociology, with affiliations with Political Science, Feminist Studies, Global Studies, and the Center for Black Studies Research, at the University of California, Santa Barbara. Previously, she was faculty at Purdue University and held visiting fellowships at Duke University and the European University Institute (Florence, Italy). Her research is ethnographic in nature and focuses on race/ethnicity, racism, international migration, and state-sponsored violence in both France and the United States. She is author of Citizen Outsider: Children of North African Immigrants in France (University of California Press, 2017), as well as numerous articles and book chapters. Her current book project is on suspect citizenship and belonging, anti-racist mobilization, and activism against police violence in France. She received her Ph.D. in Sociology from Northwestern University. She is also an Editor of H-Net Black Europe, an Associate Editor of the journal, Identities: Global Studies in Culture and Power, and Corresponding Editor for the journal Metropolitics/Metropolitiques.

With the intensification of popular debates, discussions as well as knowledge production in the form of books and articles on the subject of decolonization, it is imperative to ask what the term has come to signify today. Ngugi wa Thiongo's landmark publication Decolonising the Mind in the late eighties shifted the term's scope into social and psychological terrain rather than simply indicating a transition of political power from the hands of the colonizer into those of the formerly colonized. Today, the verb "to decolonize" evokes curricula, syllabi, wellness, beauty, fashion and food. In this talk, we will engage the various new registers of decolonization and ask what counts as real and fake decolonization today.

Bhakti Shringarpure is Associate Professor of English at the University of Connecticut and editor-in-chief of Warscapes magazine. She is currently editing a short books series titled Decolonize That! Handbooks for the Revolutionary Overthrow of Embedded Colonial Ideas for OR Books, New York.

Ours is the age of borders and walls. The government of mobility has become the central problem of the 21st century, as states develop new and terrifying ways to fix and manage unequal populations in space and in law. This lecture examines our global present through the lens of uneven human mobilities, engaging with several empirical examples that help problematise not migration and movement, but bordering and nativist closure.

Luke de Noronha is lecturer in Race, Ethnicity and Postcolonial Studies at the Sarah Parker Remond Centre for the Study of Racism and Racialisation, UCL. He recently published his first book, Deporting Black Britons: Portraits of Deportation to Jamaica.

One of the most striking developments in Latin American societies since the 1990s has been the newfound visibility of Indigenous peoples. Perhaps nowhere is this more evident than in the plurinational Andean state of Bolivia, which in 2006 saw the election of its first Indigenous president, Evo Morales. Throughout the twentieth century, Bolivia experienced rebellions from an array of social groups which sought to negotiate and at times, radically contest the (post)colonial underpinnings of the nation state. This seminar will invite attendees to reflect upon the historical, ecological and epistemological significance of Indigenous movements in Bolivia.

Olivia Arigho-Stiles is a PhD candidate in the Department of Sociology at the University of Essex. She holds a BA in History from the University of Oxford and an MA in Latin American Studies from University College London (UCL). Her UK Arts and Humanities Research Council (AHRC) funded project examines the history of ecological thought within highland Indigenous movements in Bolivia between 1920-1990. Her research interests include environmental history, peasant movements and race and ethnicity in the Americas. She writes widely on Latin American current affairs and her articles have been published in outlets including Jacobin, Counterpunch,Tribune and Novara media.

“The Politics of Knowledge: An African view” - 10th March 5pm

The university and academics’ central knowledge production role is under threat. Most knowledge consumed by the general public is consumed online. Whether neatly packaged as TED Talks, “Big Ideas,” explainer articles and videos or livestream “debates” and “seminars” on a loop, that’s how most people learn about the world of ideas. It has also sadly resulted in “my truth,” particularisms and the move away from universal struggles for a better world. The university is increasingly privatized and knowledge has to be “practical.” Journals are behind paywalls with the contents and politics increasingly obscured. Africa and scholarship about Africa are not exempt: they have been ground zero for some of these calamities. What can we learn from the African case and what futures beckon?

Sean Jacobs is associate professor of international affairs at The New School in New York City and founder-editor of Africa Is a Country, a website of opinion, ideas and new writing. Originally from Cape Town, South Africa, he studied at the University of Cape Town, UNISA, Northwestern and Birkbeck College. He has held fellowships from The New School, New York University and Harvard University as well as a Shuttleworth Fellow and Africa No Filter Fellow from the Ford Foundation. He is the author of 'Media in Postapartheid South Africa: Postcolonial Politics in the Age of Globalization' (published by Indiana University Press on May Day 2019). His research interests are the relation between politics and popular culture.

“From #BlackLivesMatter to #MilkTeaAlliance: Radical Transnational Asian Politics From Below” - 17th March 10am

The Covid-19 pandemic has exposed the racial and class inequalities of social structures at a global scale. While Sinophobic discourses are on the rise and the Asian body becomes synonymous to “the China virus,” new waves of transnational Asian activism are on the rise, addressing the interconnected fights against the militarized police state, neoliberal capitalist order, Han supremacy, and the continued impacts of Euro-American coloniality. From the solidarity actions with #BlackLivesMatter to the anti-authoritarian and democratic movements in Taiwan, Hong Kong, and Thailand under a social media phenomena “#MilkTeaAlliance,” the talk will highlight the a new form of internationalism against the rapid right-wing turn of global hegemonies that resist the simple binaries of “East vs West” or “White vs. Black.”

Wen Liu is a Taiwanese scholar, educator, and writer currently based in Taipei, Taiwan. She is Assistant Research Fellow at the Institute of Ethnology, Academia Sinica . She received her Ph.D. from Critical Social Psychology at the Graduate Center, City University of New York in 2017. Liu is currently working on a prize-winning book project under contract with the University of Illinois Press titled, ‘Assembling Asian American: Psychological Technologies and Queer Subjectivities’, where she draws from queer theory, affect, and diasporic postcolonial studies to examine how psychology as a scientific discipline has created Asian Americanness as a measurable, bio-cultural population through a Eurocentric gaze.

Between 2009 and 2014, an anti-homosexuality law circulating in the Ugandan parliament came to be the focus of a global conversation about queer rights. The law attracted attention for the draconian nature of its provisions and for the involvement of US evangelical Christian activists who were said to have lobbied for its passage. Focusing on the Ugandan case, this book seeks to understand the encounters and entanglements across geopolitical divides that produce and contest contemporary queerphobias. It investigates the impact and memory of the colonial encounter on the politics of sexuality, the politics of religiosity of different Christian denominations, and the political economy of contemporary homophobic moral panics.

Rahul Rao is Senior Lecturer in Politics at SOAS University of London. He is the author of Third World Protest: Between Home and the World, and of numerous articles in the fields of international relations, postcolonial studies, and queer theory. He is a member of the Radical Philosophy collective.