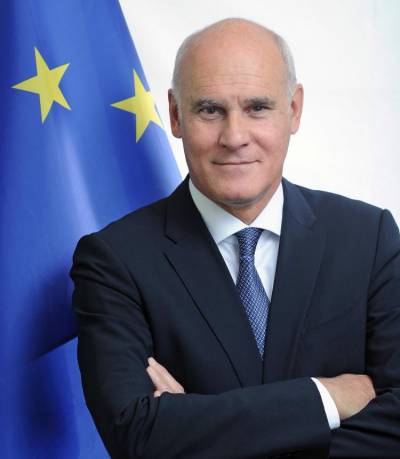 EU Ambassador to the United Kingdom

João Vale de Almeida is a senior European Union diplomat who became the EU Ambassador to the UK in February 2020. He previously served as EU Ambassador to the United Nations from 2015 to 2019. In New York, he coordinated the EU's presence in all UN bodies, working closely with the Permanent Representatives of the EU Member States.

Ambassador Vale de Almeida previously served as the first EU Ambassador to the United States of America, from 2010 to 2014. In Washington, he focused on the strengthening of EU/U.S. relations and the launching of negotiations for TTIP (Transatlantic Trade and Investment Partnership).

Prior to his appointment in Washington as the European Union’s Ambassador, he served as the Director General for External Relations at the European Commission, the European Union’s executive body. As the most senior official under the authority of the High Representative/Vice-President, he helped formulate and execute the EU’s foreign policy and played a key role in preparing for the new European External Action Service (EEAS) introduced by the Treaty of Lisbon.

Between 2004 and 2009, Ambassador Vale de Almeida was the Head of Cabinet (Chief of staff and main adviser) for European Commission President José Manuel Barroso. He accompanied President Barroso in all European Council (EU Summit) meetings and ensured coordination with the private offices of Heads of State and Governments in all 28 Member States of the EU. João Vale de Almeida was also the President’s Personal Representative for the negotiations on the Treaty of Lisbon.

He also acted as the EU “Sherpa” for G8 and G20 Summits. In this capacity he prepared and attended annual G8 Summits in Gleneagles, UK; St Petersburg, RU; Heiligendamm, DE; Toyako-Hokkaido, JP; L’Aquila, IT; and Muskoka, CA between 2005 and 2010. He accompanied President Barroso in the launching of G20 Summits in late 2008 in Washington and in subsequent meetings in London, Pittsburgh and Toronto in 2009 and 2010. He also attended Summit meetings with EU’s strategic partners around the world and with the Secretary General of the United Nations.

Earlier in his career in the European institutions, João Vale de Almeida held several senior positions in the European Commission and the Economic and Social Committee and worked closely in different capacities with and under the authority of former Commission Presidents Jacques Delors, Jacques Santer and Romano Prodi.

Immediately before joining President Barroso’s team in 2004, João Vale de Almeida held a senior position in the Directorate General for Education and Culture after serving as Deputy Chief Spokesman of the European Commission.

João Vale de Almeida joined the European Commission in 1982 at its Delegation in Lisbon, after spending seven years as a journalist. He holds a degree in History from the University of Lisbon and has studied and received training in journalism and management in the United States, France, Japan, and the United Kingdom. João Vale de Almeida was decorated in 2011 by the President of the Republic of Portugal with the ‘Grã-Cruz da Ordem do Infante D. Henrique’ (Grand Cross of the Order of Prince Henry the Navigator).

João Vale de Almeida is Portuguese; he was born in Lisbon in 1957. He is married, has two children and two grandchildren.