We proudly present our new film about directing, performing and seeing the opera "The Life & Death of Alexander Litvinenko". 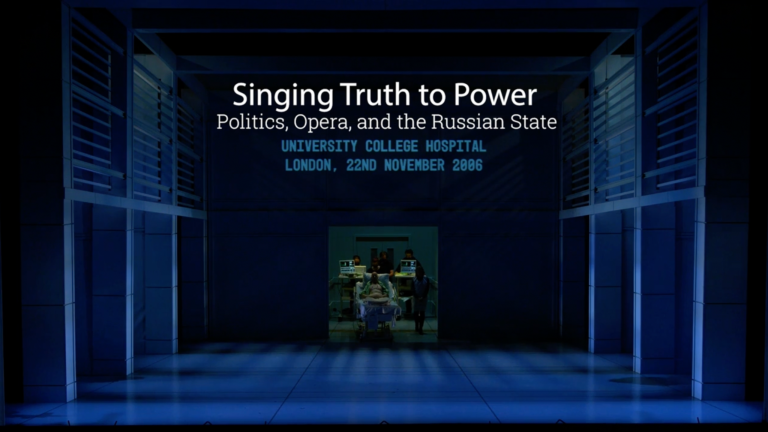 Singing Truth to Power: Politics, Opera, and the Russian State explores the themes of artistic representation, truth and political assassination in Putin's Russia. It focuses on the opera The Life & Death of Alexander Litvinenko by Anthony Bolton (music) and Kit Hesketh-Harvey (libretto), which premiered in 2021 at Grange Park Opera.

Who were Litvinenko and Politkovskaya? What do their stories tell us about Russia under Putin?

The film traces how Ray approached the role, and Medcalf came to direct an opera on the topic, while investigating the understandings that govern life under Putin, and the relationship between theatrical and historical truth.

The film was created by filmmaker by Graham Riach in collaboration with the EI's Claudia Sternberg. Many thanks to Grange Park Opera for letting us use their recording.

“Grange Park Opera on The Life & Death of Alexander Litvinenko:

Exiled and living in London, former FSB officer Alexander Litvinenko becomes Putin’s most ebullient and needling critic. He learns that his former colleagues are using his face for target practice; a law is passed that allows Russian traitors to be killed anywhere in the world.

Just a few months later – in November 2006 – Litvinenko is poisoned with radioactive Polonium-210. Alexander Litvinenko was a man who solved his own murder. As he lay dying, he worked with Scotland Yard detectives, and tracked the lethal dose to his former colleague – and football fan – Andrei Lugovoy.

This real-life story is told through a series of flashbacks and flash-forwards covering events in Russia that lead Litvinenko to seek exile and his family’s life in Muswell Hill. Extensive use is made of historic film footage.

This film was produced as part of Music Futures, our initiative with the UCL Institute of Advanced Studies.