In the first of a series of contributions on LGBTQ asylum and migration, Richard Mole examines how international refugee law and national asylum regimes create 'worthy' and 'unworthy' queer refugees. 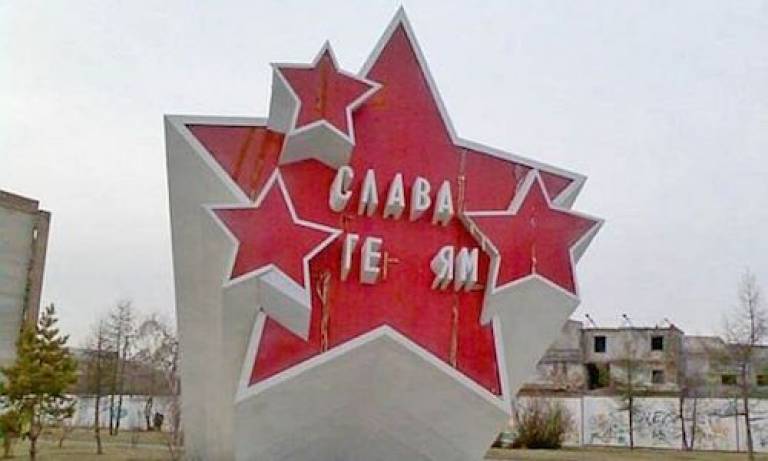 Western states should be safe-havens for queers fleeing persecution, all too often the credibility of the latter's testimony hinges on their adhering to specific stereotypes of 'worthy' refugees experiencing particular forms of harm. Using the experiences of queer Russian asylum-seekers in Berlin, this post shows how this worthiness is often based on the basis of the readability of their queerness and the 'acceptable' and 'unacceptable' forms of homophobic harm they have suffered.

While Art. 1A (2) of the Refugee Convention, which defines a refugee as an individual who has a 'well-founded fear of being persecuted for reasons for race, religion, nationality, political opinion, or membership of a particular social group', does not specifically refer to homosexuality as a protected category, sexual minorities are generally understood to constitute 'a particular social group' for the purposes of seeking asylum in view of the fact that LGBT people's sexual or gender identity is considered immutable.

For any asylum-seeker to be successful in gaining international protection, they also need to demonstrate a 'well-founded fear of being persecuted' in their country of citizenship. Until relatively recently, however, it was common practice in a range of European states to expect queer asylum-seekers to exercise discretion about their sexual orientation in their home countries so as to avoid persecution. This would allow adjudicators to deny the existence of a 'well-founded fear of being persecuted' and turn down applications for asylum. However, not only did this assume that discretion on the part of the applicant was a free choice but also that sexual orientation was a form of behaviour, which one could choose to engage in (or not), rather than part of an innate characteristic of an individual's sense of self. In this sense, it is not discretion that is asked of homosexuals but rather concealment and, as such, it runs counter to the UNHCR Guidance Note on Refugee Claims Relating to Sexual Orientation and Gender Identity, which specifies that 'A person cannot be expected or required by the State to change or conceal his or her identity in order to avoid persecution.'

Now that most EU member-states no longer (in theory) turn down asylum applications for reasons of sexual orientation on the grounds that the applicants could reasonably be expected to return home and be discrete about their sexual identity, the key means of rejecting queer asylum applications has shifted from 'discretion' to 'disbelief', with most states seeking to verify the sexual orientation of asylum-seekers during the interview process. What research has identified, however, is that the sexuality of asylum-seekers from non-Western states is being tested against the benchmark of Western gay and lesbian identities. The process of gaining asylum in the West thus presents a paradox for many queer refugees, who leave their home societies so as to be able to live their sexual lives and fashion their sexual identities in ways of their own choosing, only then to be forced to frame their queerness in ways that are readable by Western asylum adjudicators. While in Germany adjudicators are not supposed to ask asylum-seekers to prove their sexual orientation, the credibility of claimants' testimony often hinges on their adhering to specific stereotypes of gay and lesbian appearance and behaviour, with those closest to the traditional model of the male political activist fleeing violence at the hands of state officials most likely to be granted asylum.

The number of Russian LGBT applying for asylum in Germany has increased sharply since 2013, when President Putin signed the law banning the spreading of 'propaganda of non-traditional sexual relations among minors'. While homophobia in Russia has a long provenance, it is particularly since the introduction of this law that Russian attitudes towards homosexuality have hardened. While it is difficult to demonstrate the direct persecution of LGBT individuals by the Russian government, the latter has without question created an atmosphere in which homosexuals are constructed as a threat to Russian society, children, national mores and religious values, fuelling homophobia and legitimising violence against gays and lesbians. The Russian police has been directly implicated in violent attacks on gays and lesbians and has been accused by human rights organisations of failing to investigate crimes, instructing victims to drop their criminal complaints, failing to arrest the perpetrators or even arresting the LGBT victims of the attacks. In the context of living in an increasingly homophobic society, sexual minorities are often faced with the task of deciding how to respond to situations in which they are constructed as not fitting within society. One could argue that for sexual dissidents, the basic response is one of 'exit', 'voice' or 'loyalty', i.e. leave the country, engage in public protest to bring about change, or attempt to remain invisible. While eventually, both of the respondents on whose narratives I am focusing chose to exit Russia and claim asylum in Germany, they initially opted for quite different responses - namely, voice and loyalty, respectively. While both suffered physically and psychologically as a result of their choices, these different responses are likely to have a significant impact on their gaining asylum.

Maxim, a 31-year-old gay man from a medium-sized city in the European part of Russia, moved to Moscow after university and soon become involved in political activism. Protests in favour of LGBT rights in Russia inevitably attract counter-protests from the far right and, despite the presence of the police, Maxim was attacked on numerous occasions, resulting in broken ribs and a broken nose. The police repeatedly refused to arrest the attackers, arguing that this was a civil rather than a criminal matter. On other occasions, it was he rather than his attackers who was arrested. At the police station, he was verbally abused and physically attacked by five policemen. In seeking to exercise his constitutional right to free expression and public assembly, Maxim was repeatedly attacked by counter-protesters and the police. His visibility and refusal to give up his activism made him a target for arrest. After three of the four members of the LGBT collective of which he was a member had been sent to prison or were awaiting trial, Maxim realised that it was only a matter of time before he would be arrested, sent to prison or killed. And so, while visiting Hamburg to give a lecture on protest movements at the university, he found out that the police had been looking for him at his apartment in Moscow and at his parents' home and so decided that he could not return to Russia but would seek asylum in Germany.

Asya's story was very different. She is a 23-year-old lesbian from a Muslim-majority republic in the Caucasus region of the Russian Federation. She herself identifies as Muslim. Unlike Maxim, she was not out to anyone but her closest friends. When asked why she was not out, she explained: 'because I come from a religious family. My older brother is particularly religious. And, if they knew about my sexual orientation, they would kill me. It's not just that - I don't know - that they would scold me or disown me. They would kill me to cleanse the shame [I had inflicted] on the family.' Unlike Maxim, she was unable to move to Moscow, a large anonymous city with at least some LGBT venues, as living away from the family home would not have been permitted by her parents and brother. When she was 18, her family attempted to force her to marry a man they had chosen for her. In a bid to get out of the marriage, she entered into a fictitious engagement with a gay man she had met through a mutual acquaintance. However, her family did not approve of her choice and insisted that she call off the engagement. Under considerable psychological strain and fearful that she would be forced to enter another arranged marriage or she might be kidnapped by her former fiancé and forced to marry him, she decided she needed to leave the country. On the pretext that she was eloping with her (fake, gay) fiancé, who had secured a job in Berlin, she fled to Germany. As, unlike Maxim, she was not out and no-one suspected that she was anything other than heterosexual, Asya was not subject to any persecution for reasons of her sexual orientation in Russia: she did not suffer physical violence or discrimination at the hands of state institutions; nor did not suffer physical violence at the hands of her own family, on which the state institutions failed to act. Her family still does not know that she is a lesbian.

Maxim and Asya's ability to convince the asylum adjudicators that they had been subject to persecution for reasons of their sexuality would be key to the likely success of their asylum claims. Maxim's public profile as an LGBT activist who had suffered verbal and physical abuse at the hands of thugs as well as the police and had been arrested on numerous occasions should - according to previous research on queer asylum seekers - make him a 'worthy' candidate for asylum. Nevertheless, while the discretion reasoning for refusing asylum claims was officially rejected in Germany, it was also evident from Maxim's experience that an adjudicator's assessment of the validity of an asylum-seeker's claim can often be coloured by the expectation the claimant could have done more to stay under the radar in their home country. As his interviewer told him, when Maxim was discussing how hard life was in general for LGBTs in small-town Russia: 'No. Move to Moscow and try to live like a normal person in a city of 10 million inhabitants. What's there to stop you taking an apartment, going to work and keeping quiet about it? If you are the type of person who comes here and says 'I am afraid to live in my country', that is not proof that you are being persecuted.'

For Asya, trying to keep her sexual orientation a secret from her religious parents and brother in a homophobic society meant she was living under considerable psychological strain. However, she had never suffered physical violence or discrimination at the hands of state institutions or her family and was thus extremely concerned that the discretion she had exercised in Russia would be used by her adjudicators to dismiss her claim for asylum, despite this reasoning having been rejected by the CJEU: 'Honestly, I am afraid that they will turn me down. Because, again, I haven't suffered any persecution. Although, of course, when I say that, my friends say: "Had they [your family] known, they would have killed you." I reply: "Yes, but they never bothered me, they didn't hit me, they didn't kill me." […] But they can simply not believe my story because I haven't presented them with any proof. […] I'm afraid.'

What the experiences of Maxim and Asya show is that international refugee law and national asylum regimes create 'worthy' and 'unworthy' queer asylum seekers on the basis of the readability of their queerness and perceptions of 'acceptable' and 'unacceptable' forms of homophobic harm. It demonstrates that international refugee law and national asylum regimes do not always work in sync, with legal practices agreed at the level of the European Union and national governments not always filtering down to the level of individual adjudicators, thereby rendering the asylum process for already vulnerable individuals even more uncertain.