And you thought Trump was bad 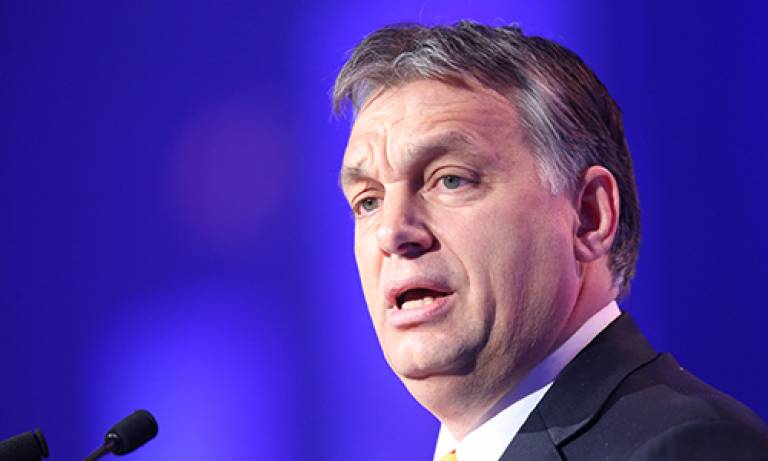 Michael Stewart argues the European leaders have found their nemesis in Viktor Orbán, whose legislation closing down the Central European University represents an ethno-nationalist and authoritarian challenge to Europe's liberal order.

When guests occasionally questioned the significance of a university to its founder, the former President and Rector of Central European University (CEU), John Shattuck, liked to remind them that unlike most human institutions, universities boast longevity. Which significant institutions live on today, he would ask, from the years of renaissance glory in Florence, Venice or Padua? The universities alone. Or, to put the matter in more familiar terms, what other British corporation founded in 1421 survives and thrives 600 years on, as does King's College Cambridge?

But after yesterday's news from Budapest, it may be that the distinguished diplomat, and former head of Harvard Library, spoke too soon.

At 12.30 pm yesterday the Hungarian parliament passed an amendment to its Education Bill which is expressly and solely intended as a means to close CEU, the most successful university in Central and Eastern Europe.

The act of parliament - now known in Hungary as Lex CEU - has already provoked outrage across Europe and the world with hundreds of academics signing the main petition, including 20 Nobel Laureates. It is, to all appearances an act in self-harm, with both the European Commission for Culture - Tibor Navrocsics (a Hungarian government appointee, as it happens) and leading conservative Hungarian academics including László Lovász, president of the Hungarian Academy of Sciences, standing by CEU.

So, what on earth is going on?

According to Viktor Orbán, the Prime Minister of Hungary, talking on his Friday morning Radio show, CEU has been 'cheating' the system. The new Act - the relevant clauses of which were published late on a Friday night less than two weeks ago, and debated in Parliament this week in an accelerated procedure - re-establishes 'the law' that foreign universities operating in Hungary must have a fully operational campus in their home country. Something is wrong here in that CEU is a both an institution domiciled in the State of New York and a fully accredited Hungarian University. At the time of the onerous and bureaucratically watertight Hungarian accreditation procedure - under Mr Orbán's administration - no one noticed that CEU had been acting illegally.

Some interpreters believe that Mr Orbán meant to say that since most of CEU's master degrees are awarded after one year of study, unlike most Hungarian universities that demand two, CEU is competing unfairly ('cheating') against local competitors.

But this does not make sense, since those who are losing out in the supposed competition are not complaining. CEU has the best library in the region and allows Hungarian university staff and students to use it, and the university maintains excellent relations with its Hungarian neighbours, who recognise it as the main site through which Hungarian Higher Education finds a window to the wider world. Numerous joint research projects are currently running and the university provides a welcome home to star Hungarian academics seeking a return home, including world-renowned network scientist, Albert-László Barabási, inventor of the scale-free network concept.

So, the puzzle remains.

Now, it is famously difficult today to work out what the Hungarian government's next moves will be in any field. With a strangulated media, an enfeebled opposition and a political elite held hostage by an apparently unseatable premier, analysts are reduced to speculating about the mental disposition of the erratic Mr Orbán. For what is certain is that nothing gets done by his government without his express permission. But there are reasons to think that the Hungarian government is seriously intended on wounding or even killing off CEU - at least in its Hungarian embodiment.

Key to the issue is the personal and ideological antipathy of Prime Minister and his circle to CEU's founder, George Soros. Soros' endowment of CEU - of over $880 million - makes it Europe's richest university and a powerful and independent force. As a private university, moreover, its governance lies beyond Orbán's famously meddling hands.

Zoltán Balog, whose Ministry of Human Capacities covers much of the Hungarian state administration yesterday told parliament: "The existence of a strong, autonomous and internationally-recognized university is in Hungary's interests.  But it is not in our interests to have players in the background who are conspiring against the democratically elected government or for example to support Soros-organizations. Soros's organizations are not above the law." The former presbetyrian minister then added that George Soros was engaged in a "worldwide smear campaign" against Hungary, noting that the current bill, or presumably the opposition to it, would "uncover the power of the network."

Mr Orbán has proclaimed his desire to build a European version of the 'illiberal democracy' championed by Vladimir Putin, Recep Erdogan, and Lee Kuan Yew (of Singapore). This represents the literal inversion of Popper's 'Open Society' that Soros has championed and promoted. Mr Orbán's vision is for a national 'social' democracy with a strong, interventionist state and an open preference for ethnic compatriots in all public matters.

Only a few days ago, Mr Orbán said he wanted to see only Hungarians in Hungary. CEU, an institution with faculty from 30 countries and students from over 100 countries, represents all that the 'Orbánistas' disdain. Worse, with this profile, and teaching only in English, the graduate-only CEU sits in the top 200 universities worldwide, with its best departments in the top 50. Not one of the Hungarian universities today reaches into the world's top 500. To a heartfelt ethnic patriot and Hungarianist, this hurts. More, it represents a challenge to the very ideology trumpeted by Orbán.

While making clear their own virulent own anti-communism (many of Mr Orbán's economic policies are designed to 'steal back from the communists all they stole from us'), the style in which they conduct politics has many parallels with that of the Bolshevik rulers. For a regime that has orchestrated coordinated attacks on all independent institutions of the country it runs, CEU is a thorn in the flesh. Since 2010, Orbán's government has, inter alia, used a law formally designed to lower top civil servants' salaries to force the independent head of the National Bank to quit; used retirement legislation to force out disloyal elder judges from the judiciary; and closed overnight, through dubious financial manoeuvres. the leading opposition paper, Népszabadság. Cultural institutions, local government, and even schools are firmly under the fist of the regime.

Universities represent a last bastion of free thought. And CEU sits on top of the pile. Indeed, it is the site where young thinkers from around the region have met, have talked, and have together tried to work out how to take the transformations of 1990 forward. The higher echelons of Ukrainian and Georgian civil services, for instance, have a disproportionate number of CEU graduates, as do those of the former Yugoslav states. Three weeks ago Mr Putin shut down the European University in St Petersburg by executive order. He and Mr Orbán are famously as close as thieves, though it is not likely that they have formally coordinated their moves.

Commentators worry over a Le Pen presidency, but in Mr Orbán, the EU has already met its nemesis: A revanchist, ethno-nationalist authoritarian who now openly challenging the 'liberal values' that lie at the heart of our continent's modern history. Of course, those who would destroy liberty never dress up in yesterday's costumes. In the 1930s they put on uniforms and broke your windows and threw your furniture out on the street. 80 years on Mr Orbán puts on velvet gloves and slides in a tiny adjustment to the regulations.

But make no mistake. These are people who know that in the 21st century you never actually put a book to the torch - but they also know that the key to power is to close down the institutions that allow young people to read the books that will one day bring today's oligarchs crashing down. For this reason, they restrict access to sites that allow the open exchange and confrontation of ideas that forms the very basis of freedom.

As of the 5th of April, 2017, both Hungary and Britain are members of the EU. It is frankly unacceptable that a sovereign government, within this community of nations, be allowed to trample on citizens' rights in the fashion the Budapest regime is doing. It is time for our government, and our European partners, to act.