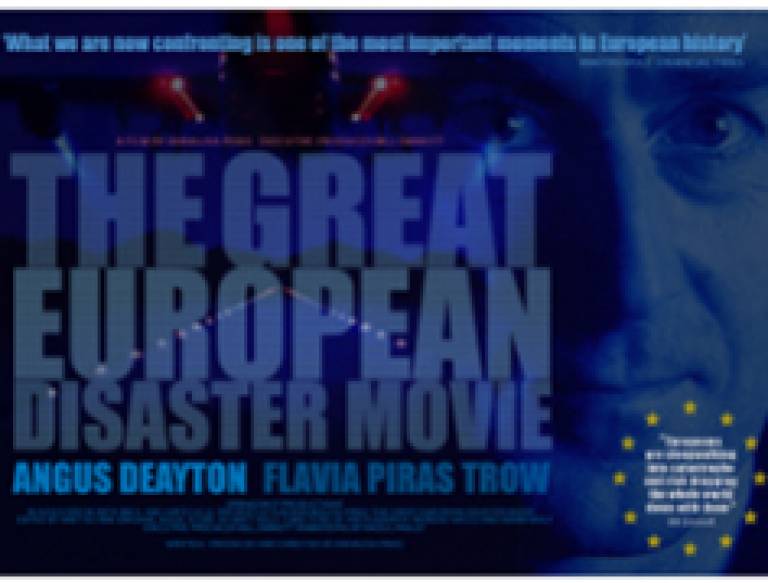 11 November 2015
Join us for a film screening and a critical debate with the director, producer and writer Annalisa Piras and executive producer Bill Emmott (former editor of The Economist), as well as Jan Kubik, director of the UCL School of Slavonic and East European Studies, and Antonios Tzanakopoulous, professor of Public International Law at Oxford. The event will be moderated by the journalist and commentator Miranda Green. Register now.

The authored documentary-drama is a BBC/Arte co-production, premiered on the BBC, 1 March 2015, after being bumped from the schedule for an earlier broadcasting in February. It was followed by a special discussion edition of Newsnight. The film has subsequently been transmitted in 12 countries and translated in 10 languages, including Japanese. In the UK press, the film provoked great controversy, centred on UKIP allegations that the film had been funded by EU money, and accusations that it presented pro-EU propaganda. According to the makers of the film, it was born of an aspiration to incite debate and critical reflection on the future of Europe and its current malaise. That aspiration is now being pursued further through the Wake Up Europe! campaign, which makes the film available to anyone who wants to organise a European debate, anywhere in Europe. Our discussion will address themes raised by the film including immigration, Brexit/Grexit, tolerance and racism, the banking crisis and austerity, war, or peace, and what constitutes a European identity.

35,000ft, sometime in the not-so-distant future. Eight year old Jane Monnetti sits aboard an aeroplane which is flying through a menacing storm, heading for Berlin. But all is not well at ground-level. The European Union has collapsed, and countries that had collaborated happily at the beginning of the 21st Century are regressing into the fractious collection of competing nation-states that existed before the EU's formation. Scared by the turbulence, Jane strikes-up a conversation with an English archaeologist sitting next to her: Charles Granda. He is about to give a lecture on the EU, an entity she had never heard of. In his suitcase he has 5 artefacts which evoke 5 lost European values.

To distract Jane from the increasingly menacing storm he tells her 5 stories about what the EU was, why things went so wrong, and what has been lost since its collapse. We rewind to 2014 and through 5 different European stories - in Britain, Sweden, Germany, Spain and Croatia - the film creates a unique, choral portrait of the "European dream" and how it could be lost forever.

Using beautiful photography, expert interviews, personal stories, and archival footage, Piras constructs a unique picture of a Europe that is worth fighting for, but which, if things carry on as they are, looks destined for disintegration. The positive achievements of a Union that has created prosperity, stability and the most advanced welfare states in the world, while preventing major wars on the continent, come to life. Yet, they also underpin the case for urgent major EU reform.

Annalisa Piras, director, producer and writer is a London based Italian film director/writer and journalist. Former London correspondent for L'Espresso magazine and La7 TV. Her most recent documentary, Girlfriend in A Coma (2013), was acclaimed as one of the sharpest analysis of the decline of modern-day Italy. It was nominated for an Italian Golden Globe (Best Documentary), for a CinEuphoria Award (Best Documentary) and was described by The Observer as an 'intelligent' imaginatively presented film' and by Le Monde as " a desperate love letter to Italy". Other work includes her BBC Radio 4 documentary The Italian Patient that was shortlisted as the FPA Best Story of the Year by a UK-based foreign correspondent. Her TV documentary on the Hutton Enquiry, written and directed for La7 TV, was shortlisted for the same award.

Bill Emmott, executive producer, was born in London, joined The Economist in 1980, and served as editor-in-chief of that publication from 1993 to 2006. He is now chairman of the London Library, writes regularly for La Stampa, Nikkei Business and the Financial Times, and is chairman and co-founder (with Annalisa Piras) of The Wake Up Foundation, an an educational charity. He has won many journalism awards, including in 2003 Italy's "E' Giornalismo" prize, for The Economist's coverage of Berlusconi, and in 2009 the Gerald Loeb Lifetime Achievement Award for Distinguished Business and Financial Journalism, granted by the Anderson School at UCLA. The author of 12 books, mainly on Japan, Asia and Italy, he is now working on a book about the task of reviving Western countries. He is the co-writer and narrator of the film Girlfriend in a Coma (2012), likewise directed and written by Annalisa Piras.

Prof. Jan Kubik is the Director of the UCL School of Slavonic and East European Studies. His research looks at the interplay between power (politics) and culture, at protest politics and social movements, and at post communist transformations.

Prof. Antonios Tzanakopoulos is Associate Professor of Public International Law at the Oxford University. He has been a visiting lecturer in Paris and at King's College London, and held previous lectureships at UCL and the University of Glasgow. Antonios studied law in Athens, New York, and Oxford.