For 10 years, the UCL European Institute has drawn attention to the importance of Europe-focused research, collaboration, and public engagement in fields from politics to the arts. 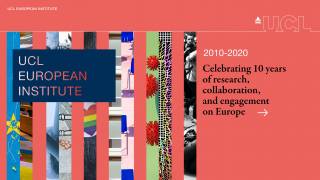 The UCL European Institute celebrated its 10th anniversary in 2020. Look back at the past decade of research, collaboration, and engagement on Europe in our 10th Anniversary Review.

Much of our work has been supported by our status as a Jean Monnet Centre of Excellence, a grant from the Erasmus+ Programme of the EU. In 2019, we entered our second three-year programme of activities, and are focusing on the theme of Passionate Politics and the Future of Europe.  Click here for more details about the current project strands.

Over the past 10 years, our work has spanned disciplines and brought together new collaborations within the UCL community and beyond. We have produced hundreds of publications and commentary pieces, facilitated dozens of influential research projects, hosted academic events and curated exhibitions.