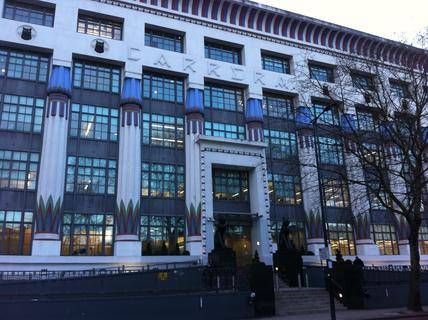 The late nineteenth and twentieth centuries witnessed large-scale European explorations of the archaeology of ancient Egypt, which increased in intensity after the 1882 British occupation of Egypt. Egypt - as a symbol, myth and idea - entered mainstream popular culture in Europe and America in diverse ways; influencing material culture and fine arts, architectural design such as art deco, fashion, literature, and early film.

The Carlton Cinema was built by George Coles in 1929-1930 with an Egyptian-style entrance. It was one of the many 1920s cinemas built in this luxurious style.

The motives and influences of European modernist artists in their appreciation of African and Asian art were diverse and complex. British modernists' appreciation was partly linked with the desire to disrupt the perceived 'genealogical' timeline (from Greek and Rome onwards) that was elevated in British art education; classical arts were positioned above other world arts. Some artists were inspired by the excitement of a personal 'discovery' of an art not considered significant in their training. Terms such as 'primitivism' or 'naïve' were applied to non-western art, demarcating difference to European norms.

The embrace by European artists of material cultures from Africa and Asia, including Ancient Egypt, occurred within the context of European colonialism. Artefacts entered Western ethnographical and fine art markets as a result of imperial exploration and exploitation. Ancient Egypt art was displayed within imperial exhibitions portraying the empire in a benign and grandiose light; for example, the tomb of Tutankhamen was recreated for the 1924 Wembley British Empire exhibition. The reception of art produced in Africa was romanticised and exoticised even by those who admired it.

In 1922 there was an exhibition of 'Egyptian Art' by the Burlington Fine Arts Club in Piccadilly. Membership included notable figures in the art world and was at its peak in the early 1920s. The 1922 exhibition catalogue noted that the idea of 'art' was a concept unfamiliar to the Ancient Egyptians. However, this exhibition displayed material culture from Egypt as art works and thus brought these objects to the attention of contemporary artists.

The above items were lent by the Petrie Museum, UCL, and included an ebony figurine of a woman (UC14210), a fragment of a statuette of a princess from Amarna (UC002) and a carved tusk from the Naqada period (UC15109). The exhibition represents one of several interactions between Egyptologists and the fine art world in this period.