Edna Manley was a Jamaican artist, who primarily worked as a sculptor. Born in England in 1900, her father was English and her mother a white Jamaican. Manley trained in art schools in London but spent most of her career in Jamaica, becoming one of the country's most significant artists whose work has left a long-lasting cultural and political imprint upon Jamaica. 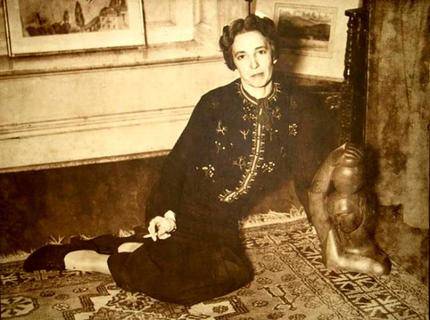 When Manley was in her early twenties she married Norman Manley, who became Jamaican Premier in 1959. She moved to Jamaica in 1922 but travelled to and exhibited in many London-based shows during the interwar period. In 1924 she became a member of the Society of Women Artists and showed Beadseller (the first work she produced after moving to Jamaica). In 1930 she was elected to the London Group and in 1937 held her first solo show in Jamaica and then England.

During the 1930s her work gave voice to her internal explorations of identity and politics, the latter a result of witnessing the struggles of Jamaican people for political, economic and social rights, which culminated in the 1938 strikes and the formation of the People's National Party, led by her husband Norman Manley.

Manley had a range of artistic and cultural inspirations including Ancient Egypt. As Basil Mcfarlane stated, Edna spoke 'of her interest, early and late, in the Mediterranean, sun-oriented, sun-drenched civilizations: in the arts of Egypt and Sumeria.' Her biographer Wayne Brown described her wood carving Wisdom as 'a monolithic, distinctly Egyptian-looking head.' Her work was also inspired by other modernist artists and, as Mary Lou Emery has stated, by the 'African diasporic present.' After her move to Jamaica, Manley's work became heavily influenced by the island's life and culture as well as Caribbean indigenous artworks. 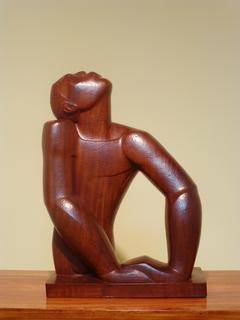 Negro Aroused is her most influential work; having significant resonance for Jamaican history. It represents a visual interpretation of the emotions connected with working class African-Caribbean struggles; she portrays a person of African heritage who has been 'aroused' to action, with head raised. The figure speaks to the social and political context of not just interwar Jamaica but also the wider anti-colonial and anti-racist struggles and actions of people of African heritage globally. Other works made in this period that represent Caribbean struggles include Prophet (1935), Diggers (1936) and Strike (1938).

Manley created these works alongside an exploration of her own identity, as she began to explore possible African-Caribbean roots within her Jamaican ancestry. At the time of creating Negro Aroused she started attending Pocomania meetings and she recalled taking visitors to these meetings, including Harlem Renaissance writer Zora Neale Hurston and in 1936 created Pocomania.

The language of 'aroused' can be compared to 'awakening', the latter phrase used by both Egyptian artist Mahmoud Mukhtar and African-American artist Meta Vaux Warrick. These terms highlight a significant trend within African-diaspora modernism, the importance of symbolising histories, experiences of oppression and of standing up for one's rights.

Can you find any other works - visual arts, performance, musical or written - that fit into this 'trend'? Explain why.