We Are Out@UCL - Bob Mills 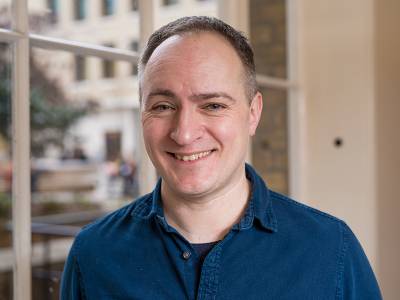 I’m a medievalist and vegetarian. I’m also a keen gardener.

I identify as a gay man and he/him are my preferred pronouns, but I don’t feel strongly invested in masculinity as a binary category. When I was in primary school I played with dolls, most of my friends were female and I remember sometimes being told by my male peers to get into the ‘girl’s line’ when we queued for lunch. While I wouldn’t want to claim trans identity as such, these early experiences were formative and have given me a strong sense of affiliation with anyone who finds themselves being misgendered or treated differently because they don’t conform to stereotypes.

What’s your role at UCL?

Professor of Medieval Studies in the History of Art Department at UCL. I also helped found and was the first Director (until September 2018) of UCL’s LGBTQ+ research network qUCL.

Could you share something about your coming-out process (whether to yourself or others)?

I had my first serious crush on a boy when I was 10 and I knew I was more attracted to males pretty much from that point on. At the time ‘queer’ was used almost exclusively as a term of abuse and I remember my primary school teacher once lamenting in class the fact that the word ‘gay’ didn’t mean what it used to!

It wasn’t until my second term of university in Manchester that I came out: I put in a call to the student-led counselling service Nightline, which took great courage as I had to use a payphone in my hall of residence. The counsellor I spoke to suggested that I might meet like-minded people if I showed up the next day at a preliminary training session for new Nightline volunteers. I went along and it was the best decision of my life. Some of the friends I made then are still friends now. And before long I was enjoying the benefits of Manchester’s burgeoning queer scene.

What challenges have you faced in being LGBTQ+? How did you meet these challenges?

I’ve experienced homophobia, of course, but less so now than in the 1990s. One challenge is sometimes simply dealing with invisibility. I occasionally travel with female friends and it’s assumed that we’re a straight couple. This has even happened when I’ve been out and about with my sister and her children. Simply being read as ‘straight’ is obviously preferable to violence or name-calling. But assumptions that heterosexuality is the default position or norm can itself sometimes feel oppressive.

What are some good things that being LGBTQ+ has brought you?

I guess I made a whole academic career out of it! My research focuses especially on representations of gender and sexuality in the Middle Ages and I’ve published books on medieval sodomy and on the queer British artist Derek Jarman. I’ve been the inaugural director of two LGBTQ research networks, Queer@King’s and qUCL, and working with other LGBTQ+ staff through UCL’s LGBTQ+ Advisory Group ‘LEAG’ has put me in touch with some wonderful colleagues who I wouldn’t otherwise have met. I’m also passionate about making queer histories accessible to a wider public through activities such as walks and exhibitions.

Not being LGBTQ+ wouldn’t necessarily prevent me from participating in some of these activities, but having a personal investment has certainly been a motivating factor. I don’t necessarily believe that the best historical scholarship is or should be ‘dispassionate’ or ‘disinterested’. Whether we choose to admit it or not, the way we represent the past will always be passionate and interested on some level, directed at transforming the world through what we know.

Does being LGBTQ+ affect your work life? If so, how?

Yes: my answer to the previous question says it all. I couldn’t really imagine doing the job I do now and not having some investment in issues of sexual and gender diversity.

What advice would you give someone in the UCL community thinking about coming out?

Coming out is an ongoing process. It doesn’t just happen once and there will always be areas of your life where you feel the need to ‘out’ yourself all over again (see my comments above about invisibility). But UCL plays host to some very supportive initiatives, including the Out@UCL staff network and Friends of Out@UCL. The regular Out@UCL networking lunches are a great way to meet colleagues from right across the university.

How can we make UCL even more welcoming for LGBTQ+ staff, students, and visitors?

The trans community has taken a bit of a battering in British media in recent months, so I’m pleased to see UCL supporting initiatives such as the Trans Studies, Trans Lives symposium in May 2019. Having Out@UCL members tell their diverse stories and making them visible on the UCL web pages also sends a strong message that our university values the sexual and gender diversity of its staff.

We shouldn’t forget our alumni either. In February 2019 I helped curate The Queer Tapestry display in UCL North Cloisters, which uncovers the experiences of UCL’s LGBTQ+ alumni. Some of the stories collated there are really inspiring and the response to the exhibition has been fantastic.

Why are LGBTQ+ role models important to you?

They give me a sense that I can be myself.

Who are your own LGBTQ+ role models (past or present)?

One particularly important role model for me, starting out as a medievalist, was the historian John Boswell. Boswell was a key figure in the emerging field of lesbian and gay studies, as it was known in the 1980s, and published an influential book on homosexuality and medieval Christianity. I first read this book as an undergraduate and while I don’t agree with all of his arguments, Boswell’s scholarship was hugely inspiring. Without the pioneering work of generations of previous scholars such as this my own research simply wouldn’t be possible.

Tell us something about yourself that we might find surprising.

I’m a karaoke queen. My signature number is ‘It’s a Sin’ by Pet Shop Boys.