In June 2018, inspired by the Friends of Out@UCL initiative, Professor Robb McDonald (Head of Department of Mathematics) and Dr Nicola Brewer (Vice Provost, International and Gender Equality Champion on SMT) co-hosted a lunch to explore the idea of setting up a Male Allies Network at UCL to contribute to and catalyse gender equality. The Provost, as well as Fiona McClement, Head of Equality, Diversity and Inclusion, and other members of the EDI team all spoke at the event.

Around 20 men - all nominated by their UCL colleagues as active supporters of gender equality - participated in a round table discussion about:

Several Heads of Department offered ideas on the positive differences they can make in creating an inclusive workplace.
Kevin Coutinho, Athena SWAN Manager, gathered up many of the suggestions on the flipcharts and will be working with Nathan to turn the material into a roadmap.

Want to get involved?

We know there are colleagues who expressed interest but were unable to make it to the lunch, and there may be others who are only hearing about this for the first time. 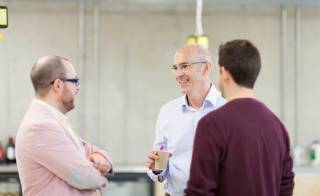