The Heineken family has invested in premium soft drinks company Double Dutch, which was founded and scaled up at UCL. 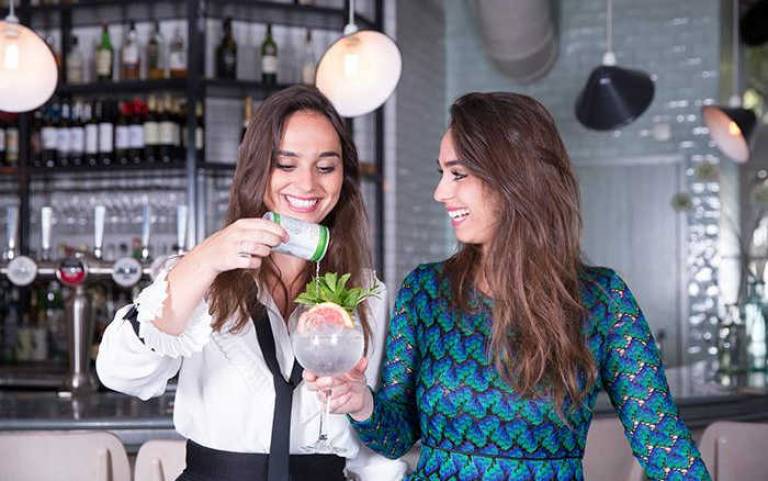 Twin sisters Joyce and Raissa de Haas came up with the inspiration for their company while studying at UCL for an MSc in Technology Entrepreneurship in 2014. In 2015 they won a UCL Bright Ideas Award (now ‘Launch a business startup programme’) securing funding to establish their company at UCL’s dedicated startup space in BaseKX.

Since then, the company has gone from strength to strength and now sells just under a million bottles of soft drink a month in 26 countries. Focusing on the market for cocktail mixers, their unusual flavour combinations, including pomegranate and basil, have proved particularly popular with consumers.

In the latest development the Heineken Family, which controls the world-famous international brewer, will take a 10% minority stake in Double Dutch. This provides vital new capital allowing Joyce and Raissa to further invest in the UK-based brand and grow its presence in international markets.

Michel de Carvalho, Executive Director of Heineken International, has also joined the supervisory board of Double Dutch Drinks. In a statement he said:

“This is our first family venture into tonics and Double Dutch is an exciting brand with two driven, ambitious young Dutch women entrepreneurs behind it. No longer a startup brand, it has captured market share in the UK which is a testament to the founders’ hard work and tenacity. I am optimistic, despite the challenges that the current pandemic presents, that Double Dutch will continue to grow exponentially as it has done over the last three years.”

Joyce and Raissa first developed an interest in drinks ‘mixology’ at home, where their parents ran a wine and spirits store.

At UCL they were introduced by a fellow student to the concept of ‘food pairing’, whereby different flavour combinations are tested together, based on analyses of their chemical composition rather than intuition. This led to the discovery of some unusual, but successful, combinations.

The twins worked with business advisors at UCL Innovation & Enterprise to transform their experiments into a commercially viable product.

“Receiving the UCL Bright Ideas Award for most promising startup really helped take our business from concept to reality, as we received our first cash investment, free office space for the year and mentorship,” Raissa says.

“We launched our first products in 2015, and in the same year we received the Virgin Foodpreneur Award from Sir Richard Branson for most innovative and disruptive food and beverage product in the UK. This really gave us the confidence and encouragement to keep on going.”

In 2019 Joyce and Raissa featured in Forbes’ 30 under 30 list, which profiles some of Europe’s most exciting young entrepreneurs.

Jerry Allen, Director for Entrepreneurship at UCL Innovation & Enterprise, said: “The ongoing success of Double Dutch is testament to the determination, drive and creativity of Joyce and Raissa. We witnessed this first-hand when they started out here at UCL.

“It also shows how the diverse community we support can foster inspiration and unique ideas with enormous potential. I hope that Joyce and Raissa’s amazing story can provide inspiration to other startups at the beginning of their own journey here at UCL to go on to great things as well.”