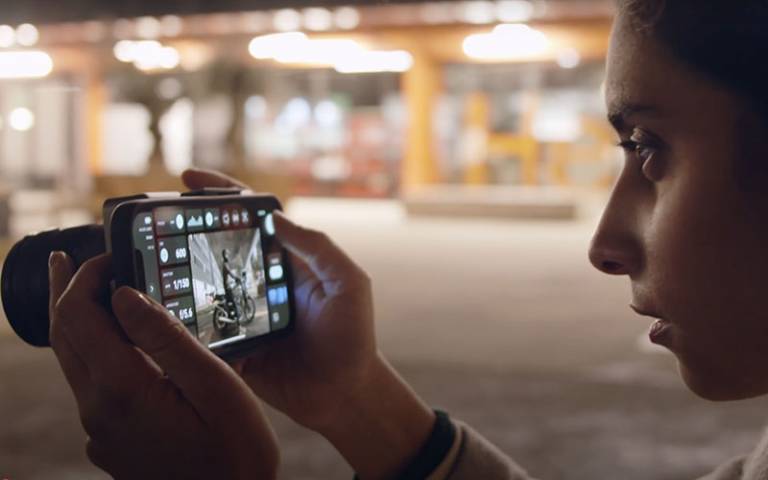 Following a highly successful crowdfunding campaign that raised £143,770, the Alice Camera prototype is being further improved and will go into production in early 2022.

The changing world of photography

Cameras in mobile phones have very small imaging sensors and tiny lens optics. This places limits on the creative control and quality of the resulting images and video, Vishal explains. In recent years mobile makers have made great strides in overcoming these limitations by using the computational power of the phone to assist capture and enhance results.

Still, most professional photographers and content creators rely on a dedicated camera with interchangeable lenses and a large image sensor to get the best results. However, mobiles are fast catching up.

According to Vishal this is because professional camera companies (some of which are over 100 years old) tend to be conservative in truly embracing new innovations. They also lack expertise in techniques like AI.

Vishal’s idea is to combine the best of both worlds. The Alice Camera is a compact device, with a large image sensor and mount for changing lenses. It also has a powerful central processing unit (CPU), graphics processing unit (GPU) and AI chip. Crucially, the camera docks and interfaces with a mobile phone, giving users a full touchscreen for capture and the ability to instantly share content online. The Alice Camera will also be open source, allowing developers around the world to build new features.

“Creators and creatives don't want boundaries and limitations set on them,” Vishal says. “They want to have complete control over their creative process and creative output. What we found with traditional cameras is that there are tons of roadblocks. That’s not to say people haven't made amazing content, but we just think that the possibilities increase once you start opening up those doors to people.”

Vishal completed a Master’s degree at UCL in Spatial Data Science and Visualization in 2017.

After forming his business with Dr Liam Donovan on the Entrepreneur First program, he was then able to set up a fully-fledged company located at BaseKX, UCL's entrepreneurship hub. There he received free, tailored support and dedicated office space helping to fast-track development of the Alice Camera.

“At that time, we were doing a lot of field work and talking to different people and mentors. If we were really going to build this very complicated product, we wanted to be sure there was enough demand out there.”

He adds: “There was massive support from UCL. The free office space and all the connections to the UCL ecosystem was hugely valuable. There were a lot of people we could talk to about intellectual property, commercialisation and innovation grant funding, among other things.”

Creative possibilities for the future

The Alice Camera successfully raised $200,000 dollars on an Indiegogo crowdfunding campaign in early 2021 and won a £175,000 innovation grant from Innovate UK in 2020. The global microchip shortage has meant that customers will receive their cameras a little later than planned, in early 2022.

While gearing up for production, Vishal is also looking to the future. He and his team of 10 employees have been working on the 5G Testbed Accelerator run by the Digital Catapult in London. 5G will enable a step-up in the Alice Camera’s ability, particularly in terms of augmented reality. For example, it could allow budding film makers to render special effects, including objects and creatures, in real time on the device, essentially placing them in a virtual movie set.