UCL mapping project for a sustainable London expands around globe

Londoners stand to benefit from a more sustainable city with the help of an innovative mapping project which started at UCL and is now expanding to include other cities and countries. 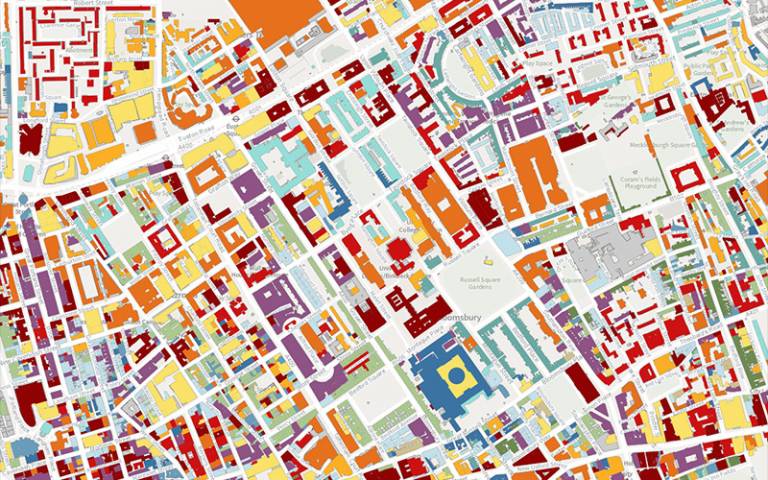 Addressing the need for buildings information

To effectively plan for London’s future, more details are needed about its existing buildings. Historically, information is fragmented and difficult to access in many countries, including the UK. This has created demand among academics, planners and other buildings professionals for more cohesive, openly available data on London’s buildings.

Colouring London, a free online platform, meets this demand. It provides information for experts to plan a more energy-efficient and liveable city for London’s population. This should lead to an improvement in the sustainability, resilience and quality of the city’s buildings.

The Colouring London platform has been developed by UCL’s Centre for Advanced Spatial Analysis (CASA) and is run in partnership with the Ordnance Survey, Historic England and the Greater London Authority, among others. The project was developed from PhD research conducted at CASA by Polly Hudson, director of Colouring London. She says the aim is to provide free statistics on all the capital’s buildings.

“Cities must be studied as complex, dynamic systems which are constantly changing at the microscale,” she said. “Data are collected through bulk uploads, computational generation and crowdsourcing.

“We’re drawing on a range of expertise. Historians, planners, housing, construction and conservation specialists, local communities, all are able to offer different kinds of information. This increases our understanding of how London has developed, and how it might be developed in a more sustainable way in future.”

Since Colouring London’s 2018 launch, there have been 4.7 million data entries. UCL’s urban scientists have benefited from these data, which help them with their academic research.

Colouring London collects and visualises open statistical data about London’s buildings. Visitors to the platform can view data and add their own, using their knowledge of particular buildings.

There are 12 categories of data, and over 50 sub-categories, which can be filled in on colour-coded maps. Categories include:

In addition to its value to specialists, the platform is also a citizen science project. It’s designed to be constantly enriched by members of the public, providing a free educational resource for the capital, including schools.

Project expands to other countries

Colouring London’s open code is being tested internationally, as part of a new Colouring Cities Research Programme. This is based at The Alan Turing Institute in London and involves UCL and international partners. Projects are underway in Lebanon, Australia, Bahrain, Germany and Greece.

“We’re also looking at how Colouring Cities might be used as a disaster management tool,” said Polly. “In Beirut, we've been working with the American University of Beirut to see how data can be collected to assess the levels of damage caused to buildings by the large explosion in 2020. Elsewhere, we might be able to do something similar with areas damaged by flooding or earthquake.”

Colouring London received early support in the form of knowledge exchange funding from the Engineering and Physical Sciences Research Council’s Impact Acceleration Account (IAA), managed by UCL Innovation & Enterprise. Polly says this support was “completely critical” to the project’s success. “Without the IAA funding, we would not have been able to develop the project further,” she said.

In total, the project has secured over £300,000 in funding from various sources.