What began as a hobby has become a thriving business for UCL alumnae Joyce and Raissa de Haas. 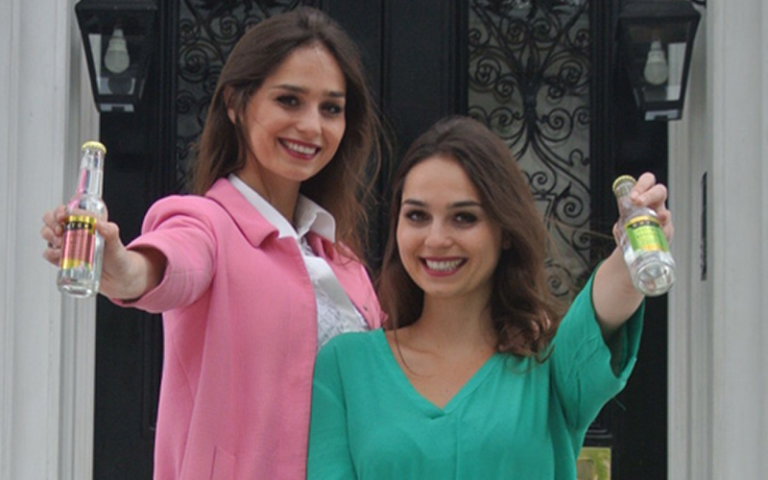 The Netherlands-born twins launched a range of premium soft drink mixers early in 2015 under the brand name Double Dutch Drinks. This was possible due to support from a £9,000 UCL Bright Ideas Award (now the ‘Launch a business startup programme’).

Customers soon developed a taste for the unusual flavour combinations, including pomegranate and basil, and cucumber and watermelon. The business expanded rapidly in the UK and internationally and Double Dutch now sells just under a million bottles of mixers a month in 26 countries.

Taking mixers from home to the marketplace

Joyce and Raissa first developed an interest in soft drink mixers at home, where their parents ran a wine and spirits store. “We would spend time in the kitchen experimenting with different combinations of flavours,” explained Joyce.

While studying for an MSc in Technology Entrepreneurship at UCL in 2014 they spotted an opportunity to turn this casual interest into a business venture. Researching the drinks market, they noted that there were plenty of spirits available, but only a limited number of mixers.

At UCL they were also introduced by a fellow student to the concept of ‘food pairing’, whereby different flavour combinations are tested together, based upon analyses of their chemical composition rather than simple intuition. This led to the discovery of some unusual, but successful, combinations.

The twins received support from UCL Innovation & Enterprise. They worked with business advisors to transform their experiments into a commercially viable product. They also became tenants at the UCL Hatchery, a free office space that provides a thriving supportive environment for student startups, with advice and support on hand whenever it might be required. This is critical at the early stages when companies are in the early growth stage.

Soon after their launch, Double Dutch Drinks were winners at the Virgin StartUp 2015 Foodpreneur Festival, which celebrates the most creative, inspiring and disruptive food and drink startups in Britain.

In 2019 they were awarded Food and Drink Entrepreneur of the Year by the Great British Entrepreneur Awards, and voted number one tonic for your G&T by GQ magazine. They also featured in the 2019 Forbes '30 under 30' Europe list.

Double Dutch Drinks has also received investment from five business angels in the UK. In the latest development, the Heineken family, which controls the world-famous international brewer, acquired a 10% minority stake in Double Dutch.

Reflecting on the company’s achievements, Joyce said: “I don’t think any of this would have happened if we hadn’t studied at UCL. It's such a supportive environment for business startups.”

Lillian Shapiro, Business Advisor at UCL Innovation & Enterprise, commented: “Joyce and Raissa are a delight to work with. They listen, learn, adapt and apply relevant advice in a cheerful and effective way. The Double Dutch twins are natural entrepreneurs, they had a problem, found that others did too, and set about profitably solving it. The simplest ideas often lead to the most successful products.”

The twins have maintained contact with the university, sharing knowledge gained from their experience with students interested in entrepreneurship and starting their own business.