Encouraging children to brush their teeth properly is a problem many parents face, but graduates from UCL’s Technology Entrepreneurship MSc have created a solution that blends technology and gaming. 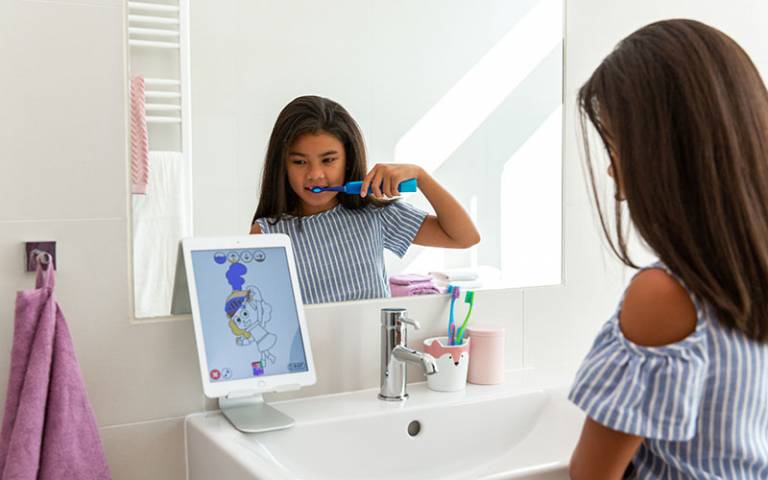 Motivating children to brush their teeth is a struggle experienced by parents around the world every morning and evening.

Paul Varga, a UCL graduate of the MSc in Technology Entrepreneurship, felt there must be a relatively simple solution to the problem. Developing ideas with fellow graduate Tolulope Ogunsina and new colleague Matthäus Ittner, Paul came up with the concept of Playbrush.

An interactive smart toothbrush, the first iteration of Playbrush was a manual toothbrush attachment – Playbrush Smart – which connects to fun games on a smartphone or tablet via Bluetooth. The team later added an integrated sonic toothbrush to their product line too – Playbrush Smart Sonic – which has extra-soft bristles and operates at the optimal 17,000 strokes per minute.

The Playbrush app has interactive games to play, where children can save the Tooth Fairy, fly aircraft or win dance battles. An algorithm measures each toothbrushing session, ensuring teeth are cleaned thoroughly for the right amount of time. The app provides real-time feedback with statistics and a reward system to give children extra motivation.

Playbrush is supported by a number of leading dentists, including Dr Paul Ashley, Head of Paediatric Dentistry at the Eastman Dental Hospital in London. He commented: "It's important that children learn the right brushing technique early. Playbrush is a great way to encourage teeth to be cleaned regularly, at the right speed and area of the mouth. The idea is very clever.”

Making an idea a business

In 2014, Paul won a UCL Bright Ideas Award (now the ‘Explore £5,000 programme’) for investment in the new company. He also received business advice from UCL Innovation & Enterprise, as well as space at The Hatchery – UCL’s business incubator for startups and new enterprises. The wide network of staff and students at UCL also provided an abundant source of families to support product development.

After creating a prototype and testing it on hundreds of children, the concept of Playbrush went from strength to strength, winning additional funding. The business associates also appeared on the BBC television programme Dragons’ Den but walked away from offers the dragons presented because they didn’t want to part with more than 1% equity. They went on to gain investment for the right amount of equity from Austrian financiers Speedinvest, business angel Hansi Hansmann and former racing-car driver Harold Primat.

Revolutionising toothbrushing around the world

Playbrush has now raised more than €3.5 million in further funding and has sold 175,000 Playbrush units in 25 countries. The company has formed prestigious partnerships to enable the distribution of its products too, including with Unilever for the French market, German Tchibo and Austrian BIPA.

The company now offers 12 games on its app – four of which are free – and has introduced a subscription model so users can engage with the company over a longer period of time. The team has also won awards such as the Health Media Award 2016 and the Gamification World Award 2015 for ‘Best Technological Innovation’.

Co-founder and CTO Tolulope Ogunsina said: “At the core of the business, we’re solving a health problem. We’re fighting tooth decay and helping people have confident smiles. The end goal is to have Playbrush in every bathroom in the world and we’re very grateful UCL Innovation & Enterprise has been really helpful in bringing us closer to our goal.”