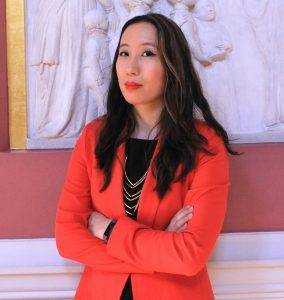 Dr Xine Yao has been elected as the Modern Language Association's Delegate Assembly to represent the forum for Nineteeth-Century American Literature, Language, and Culture 2021-2024.

PhD English student, Alberto Tondello, has been awarded a Fellowship of the Higher Education Academy (HEA)

Dr Christine ‘Xine’ Yao (UCL English) has been named as one of this year’s ‘New Generation Thinkers’ by the BBC and Arts and Humanities Research Council (AHRC). Each year the scheme gives ten early career academics, who have a passion for communication, a platform to share their ideas with a wider audience via BBC Radio 3 and other outlets

The app is an offshoot of a 10-year project based at USask to digitize the Canterbury Tales, contains key new research work. This includes a new edited text of the Prologue created by USask sessional lecturer Barbara Bordalejo, a new reading of the Tales by former USask student Colin Gibbings, and new findings about the Tales by UCL medievalist Professor Richard North. The National Library of Wales offered its digitized version of the Prologue’s original manuscript for the app.

Professor Richard North (UCL English), said: “While the app has material which should be of interest to every Chaucer scholar, it is particularly designed to be useful to people reading Chaucer for the first time. These include not only bachelor of arts university students and school children but also members of the public who have their own interest in Chaucer and his works.”

Steven Knight (UCL English 1980 and Honorary Fellow of UCL) has been awarded an OBE for services to drama, entertainment and to the community in Birmingham

The joint winners of the 2019 John Oliver Hobbes Memorial Scholarship in Modern English Literature (best submitted essay category) are Mo Barry-Wilson and Izzie Suckling. This competition, open to all second- and final-year undergraduate students of the Department, is for the best essay on a literary subject of the entrant's choosing. There were a good number of entries and the judges were impressed with the high quality of the work submitted.

The prize was set up in memory of Pearl Craigie (1867-1906), pen-name John Oliver Hobbes, who was an Anglo-American novelist and alumna of UCL. A monument to the author can be seen above the Returns section of the UCL Main Library; this was unveiled in 1908, and the Scholarship was founded at the same time. Additional Hobbes Prize categories exist for the best BA English Research Essay, and for best MA dissertation (these are awarded automatically to the highest-performing students in the Department following the respective exam board meetings and there is no need to submit entries).

The English Department has been awarded a Green Impact Bronze Award for it's promotion of Sustainability and Green Issues in 2019.

Christine Yao has championed inclusive education within her department and has been recognised by the students for the difference she has made to BME and LGBT+ students.

Researchers at UCL Department of English Language and Literature and UCL Institute of Education (IOE) are set to examine whether a new approach to teaching six- and seven-year-olds about grammar can help their writing.

UCL English Language and Literature PhD student Eva Mebius, has curated an exhibition at the Yale Centre for British Art based on her research into the imagery of floods in British art since the romantic era. Read: Boston Globe

The 2018 Eli Karlin Essay Prize has been awarded to postgraduate UCL Philosophy student Naomi Alderson for her essay 'Conflict caused by 'the Look' (and how to overcome it): Mrs Dalloway, To the Lighthouse and The Waves'. This prize, established by Professor Daniel Karlin in memory of his father, is for an essay linking literature to the study of philosophy or the history of ideas.

Amit Chaudhuri, Novelist, poet, essayist, literary critic, editor, singer and music composer, Professsor of Contemporary Literature at the University of East Anglia and an inaugural fellow at the Columbia Institute of Ideas and Imagination in Paris, has been appointed the 2018-19 Visiting Fellow in the English Department.

The 2018 Celia Phillips Memorial Lecture ‘Frank O’Hara’s Poetries of Surface’, given by Postgraduate student Tymek Woodham, took place on the 4th October 2018 in the Gustave Tuck Lecture Theatre. Members of Celia’s family and friends attended the lecture and reception that followed in the English Department. As this year was the 40th anniversary of Celia’s death, her former PhD supervisor Professor John Sutherland gave a brief address before the lecture, and has written the following memorial.

Celia Phillips (1943 - 1978) was a graduate student at UCL who died 40 years ago while near the end of her studies here. I was her supervisor and am, I think, the sole surviving member of the department who had direct personal contact with Celia. It was my good fortune.

She was a mature student - ten years older than the usual run of those embarking on graduate studies. She had worked in educational publishing before coming to UCL. Her book-trade background had inspired a fascination with the way ideas become publication and publication becomes influence.

Her other, private, impulse for undertaking research was interest in the Victorian novelist ‘Ouida’ - pen-name of Marie Louise de la Ramée - admired in her time (by Henry James among others), now sadly forgotten. This, the 1970s, was when the rediscovery of women writers, spear-headed by the publishing firm Virago, was in full swing. Celia was part of that rediscovery, which has changed our whole frame of literary history.

I shared Celia’s interest in publishing history but was less acquainted with Ouida. As often happens in a fulfilling supervisor-graduate relationship, I received as much as I gave. Precociously, Celia published articles in top-rank learned journals such as the Bulletin of the New York Public Library and Publishing History. Had she been spared the cruel affliction which prematurely killed her, she would have written the authoritative biography which her author still lacks.

Celia was a wonderfully warm and outgoing person who made friends in the Department at staff and student level. The Department felt bereaved on her death. Her family generously endowed an annual lecture, by a postgraduate, in her memory. It stands as a yearly tribute to the scholarly vitality and fresh thinking which characterizes graduate research UCL’s English Department. In that sense, she lives. (John Sutherland)

Return to News and Events page