Energy systems modelling informs planning for the transition to net zero energy systems, providing scenarios and possible pathways. Due to the many complexities and uncertainties in the energy transition process, expected policy outcomes are not always achieved. There is growing interest in assessing the socio-political feasibility of planned net zero pathways, in which all costs – financial, political, social – could realistically be borne.

TEMPEST (Technological EconoMic Political Energy Systems Transition) is a system dynamics simulation model of the UK’s socio-politically driven energy transition. It is calibrated to the historical period (1980 to 2019), and used as a tool for exploring pathways towards net zero emissions in the future period (2020 to 2080). 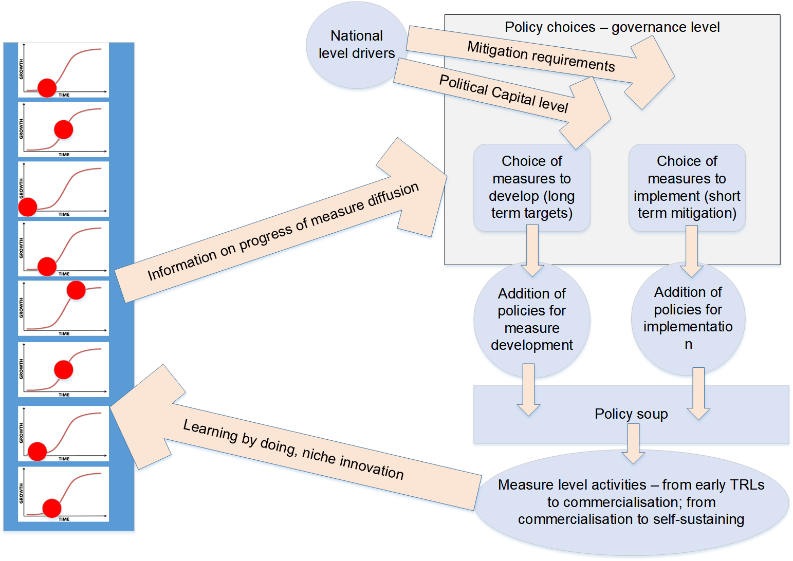 There are three model levels: the national level, which sets targets and holds political capital; the governance level, which assigns policies that promote mitigation measures; and the measure level, in which measures are developed and deployed. TEMPEST includes several feedback loops that respond (both positively and negatively) to governance pushes for energy transition. To represent this, we use the term “public willingness to participate”, which plays a big part in the deployment of measures.

Four scenarios were derived from a sensitivity analysis for 2020 to 2080. The sensitivity included variations in several influencing variables, such as changes in disposable income and energy transition drivers and barriers. Achievements in the four scenarios are seen as (i) reductions in emissions, (ii) reductions in energy use, and (iii) reductions in the carbon intensity of electricity and other fuels. The scenario that reaches the net zero target in time has highly favourable uncertainty conditions. As conditions for energy transition become increasingly difficult, savings decrease and the target is missed. Scenario 4 has significantly lower nonelectric energy savings and reductions in the carbon intensity of electricity, compared to scenario 1.

Results also indicate a tipping point, with emissions savings being highly uncertain when there is insufficient political capital throughout the transition period – which influences public willingness to participate. Without this consistency, feedback processes such as technological “learning by doing” cannot take off, and behavioural changes may increase energy consumption rather than reduce it.

TEMPEST results indicate that the socio-political feasibility of reaching the net zero target by 2050 is much less than the techno-economic feasibility. Since political capital is strongly influenced by uncertain external factors, those in governance may not be able to ensure there is always enough. However, bottom-up drivers of emissions reductions, such as social movements, could play a bigger role in the future, supported by policies. Having a governance strategy that is responsive, agile, and invites participation across society could reduce the risk of missing the target.