Terry Cotton gained a Bachelor of Science in Geology at UCL in 1969, when he was also awarded the Faculty of Science Medal.

This was followed by a PhD at King’s College London in 1972 on the subject of “Mineralisation at the Mount-Wellington Mine, Cornwall”.

My interest in geology was started by living in Newlyn on the shore of Mounts Bay where there are excellent exposures of various rock types, their contacts and structural features. I was fortunate to have good tuition to A level by two enthusiastic local teachers. In fact a number of students from the Humphrey Davy Grammar School preceded me to the UCL Geology Department. 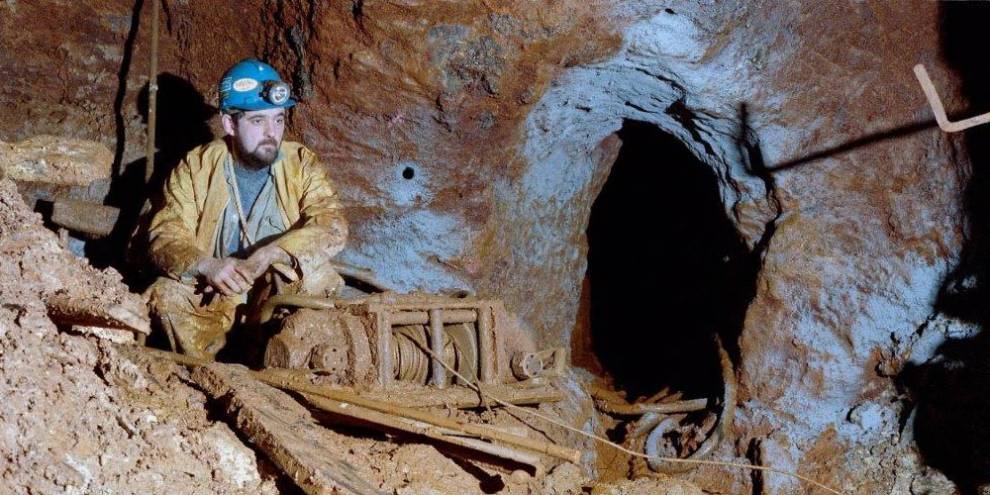 Taken in 1983: 72 fathom level Cardozas Shaft, United Mines c 1.5 km west of Mt Wellington Mine (depth c. 200m below surface). These old workings were dewatered by pumping from Mt Wellington Mine and were accessed from a Mobile Headframe set up on the nearby Francis Shaft.

My degree course also involved comprehensive field trips with extended mapping in Llangollen, Wensleydale and culminating in a six-week mapping of the Loch Nafooey area in Galway/Mayo in Western Ireland. Following my BSc exams, I joined Consolidated Goldfields as an exploration geologist based in southern Ireland. After six months I was approached by a Canadian mine geologist who was responsible for the opening of a new mine in Cornwall – the Mount Wellington Mine – to assist in the structural and geochemical aspects through a PhD organised with King’s College London. This involved lengthy spells underground and living with the mining crews and mining engineers. On completion of my PhD I became employed at the neighbouring Wheal Jane Mine – operated by Consolidated Goldfields – as the Shaft Section Geologist: - i.e. I was responsible for driving the deeper-lode drives from the main shafts of Wheal Jane towards and into Mount Wellington Mine 1.5 km to the West. It was a fantastic experience every morning to see a fresh exposure of lode (mineralised vein) structure never before seen by human eye. There was also the camaraderie of the mining crews I was responsible for and their amusing “banter”. This is very important in a potentially dangerous working environment. Although one of the most dangerous aspects was holing into uncharted old workings, resulting in an inrush of water, there were numerous fatalities at the mine from falling, crushing accidents or oxygen deficiency. In respect of this I joined the Mines Rescue First Aid Team, which further strengthened my commitment to the underground working environment. Our First Aid Team regularly trained and competed with teams from other Cornish mines (Geevor and South Crofty) and a team from the Ball Clay Mine near Bovey Tracey, Devon.

In 1975, I was promoted to Senior Mine Geologist. During my working hours, very few were spent looking at rocks. The main responsibility of a mine geologist is daily grade control (ensuring a correct balance of grade to the mill), designing diamond-drill programmes, mine planning and ore-reserve calculation.

In May 1977, Wheal Jane suspended operations due to potential flooding of the Mount Wellington Mine from the extensive flooded workings of the 19th-century United Mines which adjoined the Mine to the West. At that time everyone who worked underground was a member of the TGWU (Transport and General Workers Union). Officials of that Union invited me to talks with the Government in London with the aim of gaining funding to keep the mines in “Care and Maintenance” rather than full closure. This was a success and protected the potential future employment of c. 500 mine workers for the succeeding decade whilst a new company could be found to operate the mine. During this waiting period Consolidated Goldfields again employed me as an exploration geologist in northern Scotland – mostly involved with the Gairloch Copper Gold project. 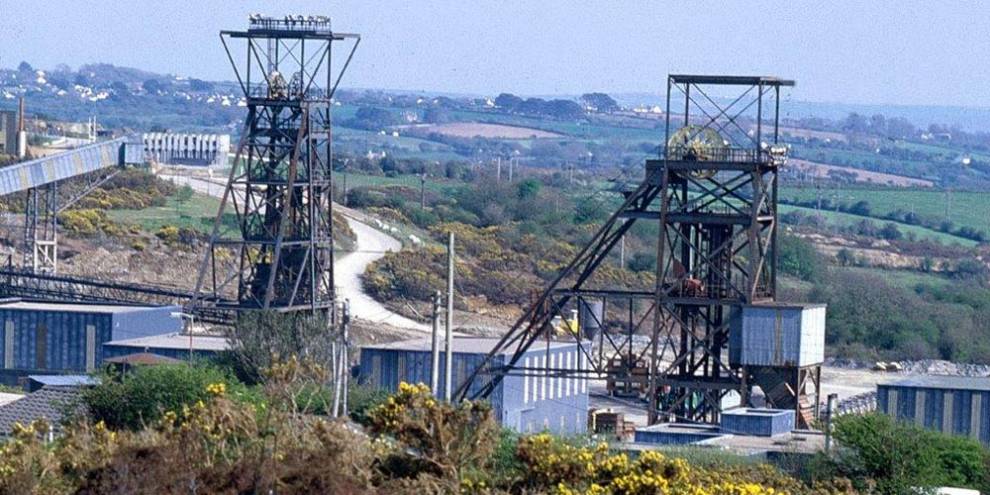 “Wheal Jane Mine, looking SE. No 2 Shaft on right to 11 level, for man riding and materials; Clemows Shaft on left to 15 Level (470 m below surface), for continuous rock hoisting.

In October 1978, I was approached by an American entrepreneur – Mr R L Sprinkel – for my expertise to present a feasibility study to re-open the Wheal Jane Mine. The work involved feasibility studies of the ore reserve potential and the mine planning to convert the Mine to “trackless mining” techniques which would prove to be more successful and flexible in accessing an increasingly wide and complex sulphide + tin ore body. The outcome of these efforts was that the mines (Wheal Jane and Mount Wellington) were taken over by RTZ (Rio Tinto Zinc) and I was appointed Chief Geologist – responsible for setting up and managing a new geological and mine planning department for a 280,000 tonne/year mining operation producing zinc, tin and copper. In 1983, I was promoted to the position of Manager Geological Services with additional responsibility for other operations owned by RTZ including Delabole Slate Quarry, Viaduct Coal Mine (Ayrshire) and, most importantly, the acquisition of South Crofty and Pendarves Mines in 1984.

However, the long term future of tin mining in Cornwall became problematic with the Tin Price Crisis in the mid-1980s caused by mismanagement of the London Metal Exchange. After a struggle with low metal prices and increasing operating costs – mainly due to pumping - Wheal Jane finally closed in February 1991. I then became self-employed for a short period, being involved in projects in Siberia and Portugal.

A year later, I was once again employed as Manager of Geological Services, this time for a private coal mining company – Young Group Plc – based in Consett, County Durham (during my time with RTZ I had several years’ experience in their coal operations). I relished the new challenge of the responsibilities of establishing metal-mining techniques in the coal industry – updating grade control and mine planning (balancing various coal characteristics to satisfy power station demands) and resource calculation. Again, the most interesting aspects were regular inspections of Young Group coal operations – both opencast and underground in the Midlands and North of England and also the Naricual Coal operation in Venezuela.

In late 1993 diminishing continuity of Young Group’s mining activities resulted in moving back to Cornwall, where I was employed as a Consultant Mining Geologist by Cornwall Consultants Ltd, based in Redruth. In Cornwall it is mandatory for solicitors to request a “mining search” on any property sold to establish if there is any financial risk from subsidence. Most of the time I was engaged in site investigation and shaft capping (ironic to spend a long time digging holes in the ground – then having to fill them in again!).

Since my retirement 10 over years ago I have enjoyed relaxing in West Cornwall with some occasional consultancy work in Portugal and, more recently, two years with Cornish Lithium, who are currently exploring the United Mines area west of Mount Wellington / Wheal Jane Mines for deep hot lithium brines which are recorded in the old workings. I have really enjoyed attending recent gatherings at UCL and the opportunity to meet up with the staff and the “survivors” of the Geology class between 1966 and 1969, and I hope that I can be of assistance to UCL in the future.