Roberto Bugiolacchi gained a Bachelor of Science in the field of Planetary Science at UCL in 1999, a PGCE at the Institute of Education (now part of UCL) in 2000, and a PhD at UCL in 2006.

I had a special dispensation to stay up late and watch the first lunar landing, which occurred at 22:17 Italian time. It was only a few days after my sixth birthday. Since an early age, I was blessed and cursed with an insatiable curiosity for everything and “why and how” remained my adverbs of obsession. However, influenced by local circumstances, my life path took me as far away from science as possible, ending up with a diploma in business studies and a dream of a life in making music and performing. 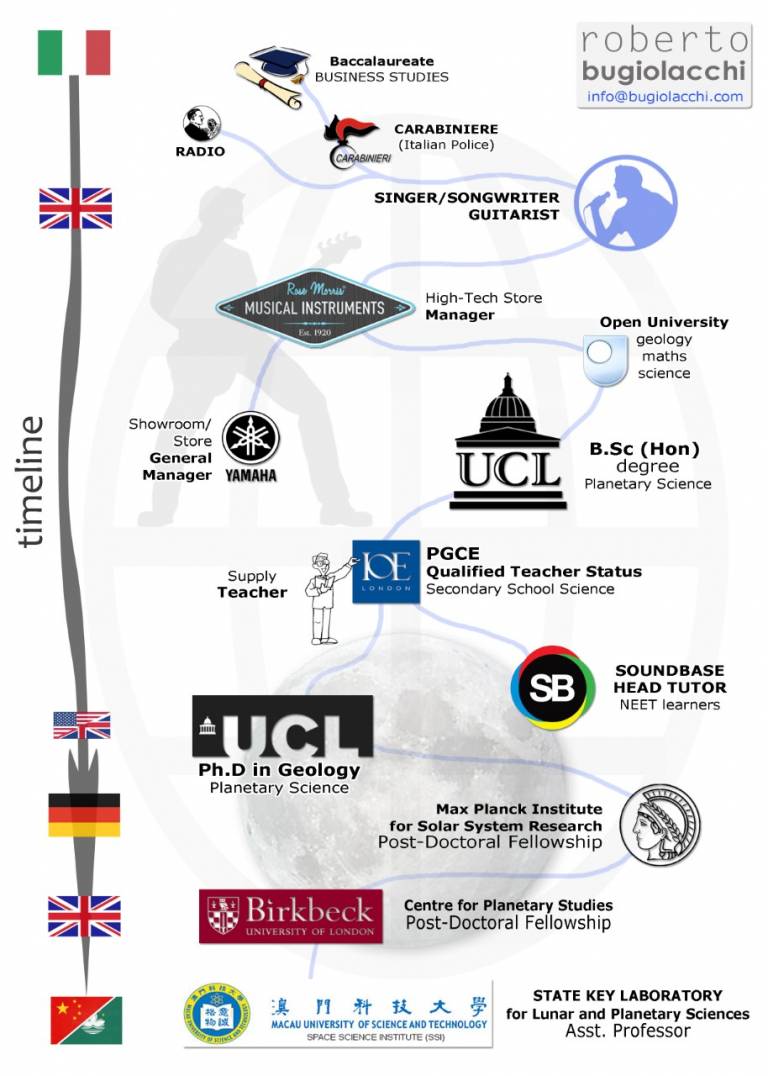 Driven by ‘artistic’ ambitions, I left for the UK at the age of 21 and never looked back. Years of up and downs in the ‘music biz’ led me to dedicate my free time to science, as a ‘hobby’, enrolling in Open University courses, studying units ranging from geology to maths. While this was going on, I had started working for a college designing and running a FE course in Sound Engineering. After the first year, they asked me to get a degree to enrol permanently. Armed with my OU certificates, I approached the only two universities I knew of in London: Imperial College and UCL. Following interviews, I was offered a place by both. But UCL won hands down, giving me the exiting opportunity to enrol in the Earth and Space Science course. And my life changed forever. I was already well into my early thirties, but I found the environment fabulous, making friends for life and studying under great scientists, not least professors David Price and John Guest. These two gentlemen were instrumental in giving me an amazing opportunity in starting my journey in academia at the age of nearly 40. The bait was exceptional: the first, major mission to the Moon (Clementine) had produced amazing new data and ‘NASA’ needed someone to interpret the multispectral data in a geological context. The greatly missed Paul Spudis (JPL) sent our department a computer loaded with custom software and the new data telling me to get on with it and publish. Paul Spudis, John Guest, and then the PhD defence with Lionel Wilson as the external examiner… main players in the planetary science field. I was a very, very lucky man.

My PhD studies lasted a bit longer than I wished since I was self-financing by working as a secondary school supply teacher… but, luck struck again when, a year later, I received a phone call from Germany; the Max Planck Institute for Solar System Research was looking for someone to look at the infrared data from a German instrument onboard the first Indian lunar mission, Chandrayaan-1. After four years as a post-doc at the MPI, I got an offer of a new position from Birkbeck College based at ‘my’ old Centre for Planetary Sciences (CPS) in UCL, to work on a citizen science project (MoonZoo), also involving Chris Lintott of Sky at Night/Oxford fame.

After the grant ran out, now at the tender age of 52, it seemed that my (academic) luck would also follow suit, and I had to return home after 30 years. But within a few weeks, I received an unexpected invitation to speak at a planetary conference in Beijing. Now, armed only with my honorary affiliation with UCL but no funding, I still decided to roll the dice. I got two job offers. I am now an assistant professor at the Key State Laboratory of Lunar and Planetary Sciences in Macao, China. Before you scoff, the KSL is the equivalent of the Max Planck Institutes in Germany, the only one in China. What am I doing here? Lunar science, of course, also looking at new images as they come from the far side of the Moon, thanks to the Chang’e-4 lunar mission. Lucky? Yes, very. But with a name like “Bugiolacchi”, I was destined to be. At least in science.