Detecting and Modelling Snow and its Effects on Arctic Sea Ice. 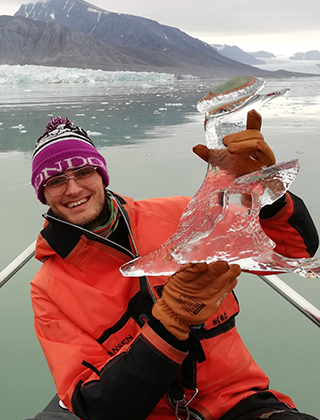 Snow is the most reflective and insulating natural material on earth. It therefore has a significant effect on Arctic sea ice thickness and coverage. My PhD investigates the properties and distribution of snow using satellite remote sensing and models on many different scales. The effects of snow on sea ice are poorly understood, but critical in determining how much sea ice will shrink as the world warms.

Climate models forecast a reduction in snowfall as the century progresses, how will this effect sea ice decline? The reflective properties of snow shield the underlying ice from sunlight during the melt season, helping preserve it. However, the thermal blanketing limits its growth at the onset of winter. Furthermore, snow is easily melted to form melt-ponds, which absorb large amounts of the sun's heat. Disentangling these competing effects is a major part of my PhD.

Snow also biases our estimates of sea ice thickness, as it weighs down the ice and makes it seem like there's less than there really is. Furthermore, snow slows down the radar-waves emitted from satellites, compounding this underestimation. Effective knowledge about the distribution of Arctic snow is essential to knowing how much sea ice truly exists at a given time.