Plankton evolution and the Paleogene/Neogene transition. 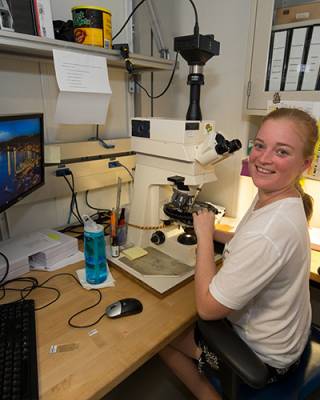 This project will document the structure and timing of calcareous nannoplankton diversity through this interval (33–21 Ma) and test whether climatic shifts played a significant role in plankton evolution, population variability and population composition. Sample material will primarily focus on cores recovered during IODP Expedition 342 to the North Atlantic in 2012. The clay-rich sediment drifts are unique for deep sea sediments as they provide expanded stratigraphy and exceptional microfossil preservation.

Claire graduated from Midwestern State University (Wichita Falls, Texas) in 2013 with a BSc in Geosciences before completing her MSc at The Florida State University (Tallahassee, Florida) in 2015. Claire was a member of IODP Expedition 355 Scientific Party that sailed in the Arabian Sea in 2015, collecting material for her master’s project.