“Using seismology to understand the link between active faults and fluid flow in the Chilean Andes.”

Understanding the tectono-magmatic relevance of transverse faults in the Andes, Chile from seismicity and seismic imaging. 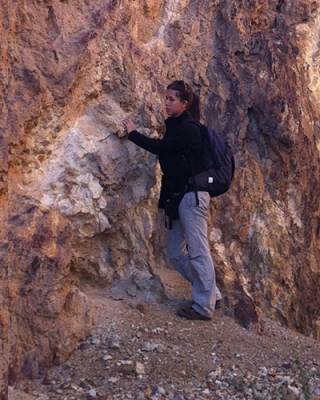 In convergent margins, the main faults and folds tend to align parallel to the margin constituting high-strain domains that control the structural evolution and shape of mountain chains. These first-order structures are considered to represent the long-term record of the deformation history of their associated orogenic belts and volcanic arcs. Nevertheless, second-order structures are abundant in these subductive settings and are thought to play a role in the transport of crustal fluids. Despite this and the presence of significant volcanic, hydrothermal and ore deposits in the Chilean Andes, little is known about transverse structures either on the surface or at depth.

Through a combination of NERC and FONDECYT funding 12 broadband seismometers have been deployed in the Teno river valley in March 2017. I will use the resulting data to accurately locate earthquakes and perform seismic tomography to image faults in high resolution from the surface to lower crust/mantle depths and understand if these large structures control the transport of fluids at depth.