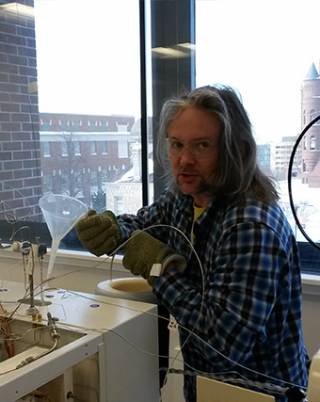 I originally trained as a field geologist and went on to develop skills that enabled the reconstruction of seasonal changes in Jurassic marine conditions through the analyses of oxygen (δ18O) and carbon (δ13C) isotopes archived in the biogenic carbonate of 160 million year old fossils. My training in geochemistry was later expanded to include the analyses of other proxies archived in ancient sediments. These included iron (Fe) speciation to constrain changes in marine redox conditions, along with the analyses of nitrogen (δ15N) and sulphur (δ34S) isotopes to constrain nutrient cycling.

My current research is focussed upon a period of the Proterozoic formerly known as the 'boring billion'. Far from being dull, it is now becoming apparent that major changes occurred during this period including the appearance of multi-cellular eukaryotes. Working as part of an international consortium we are planning the geochemical interrogation of exceptionally well-preserved marine sediments from China that record the evolution of marine nutrient cycles during this pivotal period.