The 2018 eruption of Kīlauea volcano, Hawai'i released huge volumes of volcanic gases to the atmosphere. Dr Emma Liu was part of the team studying the environmental impacts of these emissions. Their findings are published in two companion papers in Communications Earth & Environ. 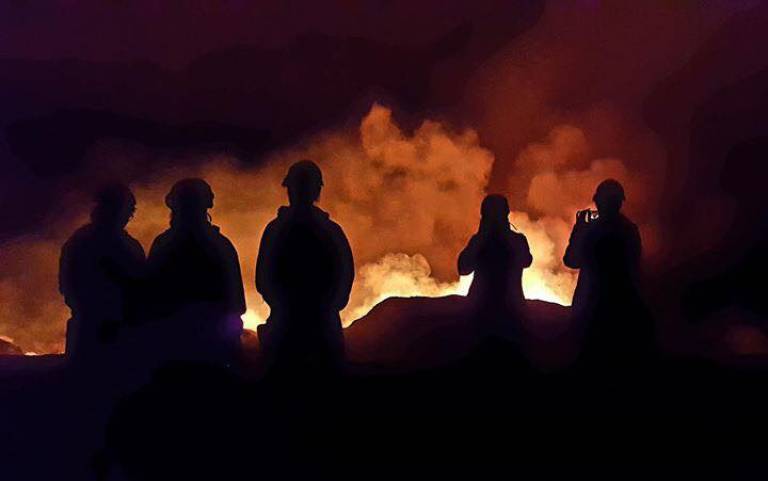 Volcanoes emit large amounts of trace metals and metalloids into the environment during both passive and eruptive outgassing. Many of these trace elements are classified as ‘metal pollutants’ by environmental and health agencies (e.g., As, Pb, Cu, Mo) and pose numerous hazards to air and water quality downwind of the volcanic source.

The 2018 eruption of Kīlauea, Hawai’i, was a basaltic fissure eruption that produced unprecedented emission rates of both lava and volcanic gases between May and August 2018. The gas plume from this eruption degraded air quality across the Big Island of Hawai’i and presented a rare opportunity for a research team, including Dr Emma Liu (UCL Earth Sciences), to conduct an island-wide experiment investigating both the source composition and downwind transport processes that control the input of volcanic aerosol pollutants to the environment. In two companion papers, published today in Communications Earth and Environment, the team combine in-situ field measurements of volcanic emissions with thermodynamic modelling of metal speciation, to shed light on the behaviour of these enigmatic aerosol species.

The first paper, led by Emily Mason (a PhD student at the University of Cambridge), compares the volatile metal composition of volcanic plumes emitted from the main magmatic vent (Figure 1A) and the ocean entry where lava flows meet the ocean and boil seawater (Figure 1B).

Figure 1: The 2018 eruption of Kīlauea produces two eruption plumes, one at the main magmatic vent (A) and the second where lava flows met the ocean (B). Modified from Mason et al., (2021)

Mason et al. (2021) find that the two plumes have very different chemistries and that this translates to contrasting metal fingerprints in their emissions. Ligand-forming elements S and Cl have a key role to play in determining the ability of various volatile elements to degas. Magmas erupted at Kīlauea are S-rich and Cl-poor therefore ‘S-loving’ volatile elements such as Se, Te and As are abundant in the gases emitted from the magmatic Fissure 8 vent. In contrast, in the Cl-rich (due mainly to the large Cl contribution from boiled seawater) and S-poor ocean entry plume, ‘Cl-loving’ elements such as Cu and Cd are abundant. Cu emission rates from the ocean entry may even be greater than those from the magmatic vent.

The observations presented in this study highlight the importance of S and Cl availability in modulating the outgassing of volatile trace elements. Further, these insights provide a means to assess metal emissions from massive basaltic eruptions in Earth’s geological past such as continental flood basalts and oceanic plateau basalts. Figure 2: Summary cartoon showing the contrasting chemical compositions of the magmatic plume (A) and ocean entry plume (B), whilst illustrating some of the key processes involved (Mason et al., 2021)

The second paper, led by Dr Evgenia Ilyinskaya (Associate Professor at the University of Leeds), focuses on the lifetime of volatile metal aerosols in volcanic plumes as they are transported downwind. Setting up a network of sampling instruments from source to 250 km downwind of the eruption, the study examines how volcanic metal pollutants are dispersed and deposited to the environment.

“As the plane came into land in Kona airport, I noticed immediately that the air was thick and hazy with volcanic fog, known as "vog". I couldn't believe this was still more than a hundred kilometres from the eruption site, on the opposite side of the island. It was immediately clear why sampling this distal plume was so important." Dr Emma Liu (co-author), Lecturer in Earth Sciences, UCL

Ilyinskaya et al. (2021) find that the relative proportion of sulfur as SO2  gas versus sulfate aerosol changes downwind over timescales of several hours (Figure 3A). Although this chemical conversion process is well established, these data explain clearly why urban areas far from the eruption side were experiencing poor air quality, especially when visualised alongside dispersion models based on regional wind fields.

Further, the study shows that volatile metals, which are typically transported as water-soluble particles (e.g., chlorides, sulphates, oxides) were substantially depleted downwind within 40 km of the source vent, and much more quickly than refractory elements, which are typically carried in insoluble particles such as ash. The first 40 km of transport (first few hours of plume transport), over which volatile elements are rapidly depleted, coincides with an area that receives some of the highest rainfall across the entire island. Together these observations suggest that wet-deposition accelerates the deposition of water-soluble metal aerosols during early during plume transport, fractionating volatile from refractory elements.
The observations presented in this study suggest that volcanic metals pollutants may disproportionately impact the environment and communities closer to the vent (especially in humid tropical atmospheres where atmospheric water is highly available) and raise questions about how metal transport may differ in cooler drier atmospheres encountered during high latitude eruptions. 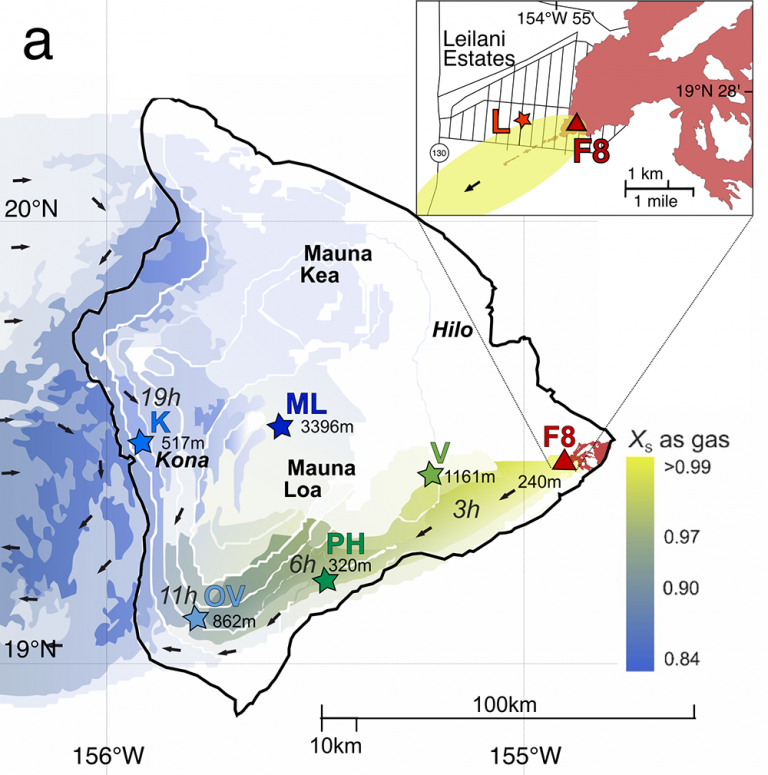 Figure 3: Downwind transport of the volcanic plume on the Island of Hawai’I, showing the typical dispersion pattern and average plume age (hours). Fraction of sulphur (XS) in the gas phase is shown here as a proxy for the plume’s chemical maturity at variable distances from source. Star symbols show sampling locations. Inset map shows the Leilani Estates and the coverage of the lava flows (note that lava flows extended further to the coast). Modified from Ilyinskaya et al. (2021).

For more details, you can read the full articles here:

Accessible summary:  Behind the Papers blog from Emily Mason