In Memory of Professor Mike Audley-Charles.

Mike died on 12th January 2021, two days after his 86th birthday. His innovations and vision are behind what is today’s highly successful UCL Department of Earth Sciences, and we are all greatly in his debt. 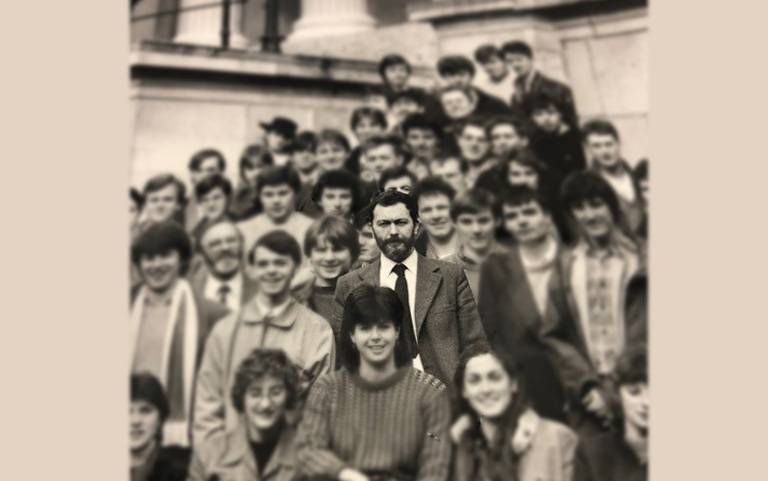 Mike Audley-Charles during his headship at the Department of Geological Sciences at UCL circa 1990.

Michael Geoffrey Audley-Charles (1935-2021) was Yates-Goldsmid Professor of Geology at UCL (1982-93), and served as the Head of the Department of Geology (later Geological Sciences) from 1982 to 1992. Mike took on the leadership of the UCL Department of Geology from Prof Desmond Donovan, having previously been Head of Geology at Queen Mary College. With the strong support of the then Provost (Sir James Lighthill), Mike significantly enlarged the department, and negotiated the merger of the UCL and QMUL departments, which took place after his first year at UCL.

The enlarged and merged departments were renamed in Sept 1983 as the UCL Department of Geological Sciences. Mike expanded several areas of research, such as rock physics and micropalaeontology, and introduced several new activities into the department, including mineral physics, experimental petrology, fission track analysis, geo-hazards research, planetary sciences, and environmental geosciences.

Before transferring to UCL, he had been Head at Queen Mary College from 1977. Before that he was on the staff at Imperial College, where he also took his PhD, after spending several years as an exploration field geologist in Canada, Australia and SE Asia. Mike was an outstanding field geologist, and an inspirational teacher, who could capture the imagination of those students lucky enough to be with him, with a compelling and coherent reconstruction of the history of an outcrop or field area, outlining the evolution of its stratigraphy, structure, ecology and the current geomorphology. These skills were developed over many years of work in the field, and exemplified by Mike’s PhD thesis, which was on The Geology of Portuguese Timor, which he mapped single-handedly. His research expertise in the geology and evolution of South East Asia, eventually led to the formation of the South East Asia Research Group (SEAREG), and his long and fruitful collaboration with Prof Robert Hall, who moved to UCL from QMUL in 1983. After Mike’s retirement, Robert Hall moved the RHUL, and the SEAREG is still active and based in Egham . Amongst numerous publications, Mike produced major contributions on the reconstruction of Gondwanaland, the evolution of the Banda Arc, and SE Asia more generally.

Field work in the tropics can be a dangerous pastime, and Mike would quite airily describe nights spent under canvas in the jungle, warding off venomous snakes, spiders and insects. It was a smaller water-born parasite, however, that almost prematurely finished Mike’s career (and life), and caused his evacuation and hospitalization back in the UK. It was there he met his wife Brenda (née Cordeiro), and they married in 1965. They had two children, and lived Twickenham and then for many years in Sussex. After Mike and Brenda retired, they moved to rural France, close to Cahors. In addition to enjoying the famed wines and food of the region, Mike dedicated much of his time to reading, researching, and writing on the joy of his life… Shakespeare. He organised local celebrations of Shakespeare in their village, and wrote a manuscript on the Bard, and a speculative essay on his possible early life in Italy.
Towards the end of his life, Mike was not in good health, and he and Brenda returned to Sussex. Mike died on 12th January 2021, two days after his 86th birthday. His innovations and vision are behind what is today’s highly successful UCL Department of Earth Sciences, and we are all greatly in his debt.