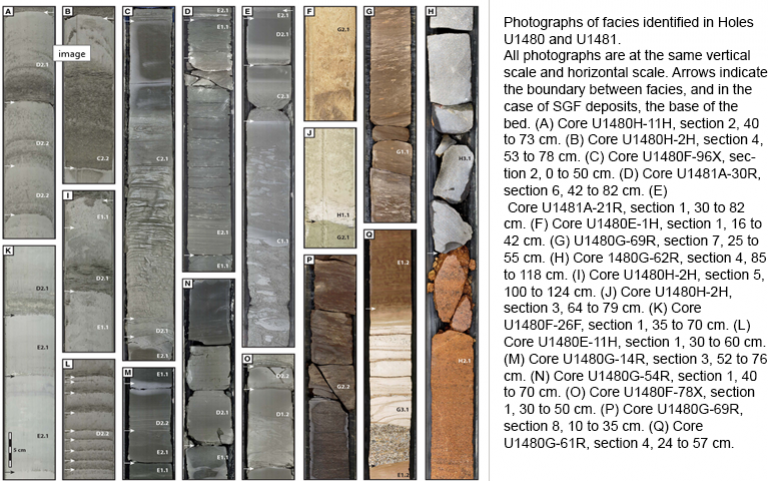 The Nicobar Fan and Bengal fans (Figure 1) can be considered as the eastern and western parts, respectively, of the largest submarine-fan system in the world. Drill sites in the southern Bay of Bengal at 3°N 91°E (International OceanDiscovery Program Expedition 362) have sampled for the first time a complete section of the Nicobar Fan and below to the oceanic crust. The Nicobar Fan is a major sink for Himalaya derived material. This generally overlooked part of the Bengal–Nicobar Fan System may provide new insights into uplift and denudation rates of the Himalayas and Tibetan Plateau. Terrigenous sediment input began in the early Miocene at ca 22.5 Ma as muds,overlain by very thin-bedded and thin-bedded muddy turbidites at ca19.5 Ma. From 9.5 Ma, sand content and sediment supply sharply increase. The persistent connection between the two fans ceased at 0.28 Ma when the Nicobar Fan became inactive.

The research by Pickering (who was Lead Sedimentologist on the expedition) and colleagues presents integrated results of IODP Expedition 362 with older Deep Sea Drilling Project/Ocean Drilling Program/International Ocean Discovery Program sites that show that the Bengal–Nicobar Fan System experienced successive large scale avulsion processes that switched sediment supply between the Bengal Fan (middle Miocene and late Pleistocene) and the Nicobar Fan (late Miocene to early Pleistocene). A quantitative analysis of the submarine channels of the Nicobar Fan is also presented, including their stratigraphic frequency,showing that channel size/area and abundance peaked at ca 2 to 3 Ma, but with a distinct low at 3 to 7 Ma: the intervening stratigraphic [sub]unit was a time of reduced sediment accumulation rates. 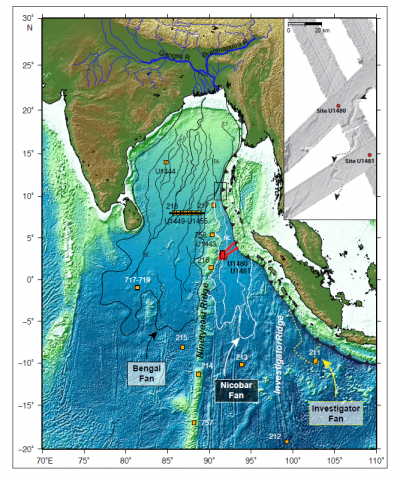 Fig 1: Regional map of the Bengal Nicobar and Investigator fans, Indian Ocean. The map includes the deep-marine sedimentary system with fans separated by ridges, the Ganges–Brahmaputra River system, and relevant DSDP/ODP/IODP drill sites. Note the submarine channels that are recognised on the seafloor. Top right inset is a bathymetry map of the seafloor around IODP Expedition 362 sites, showing  the presence of well-identified channel heading south.

Further research by Pickering and colleagues showed that both the Nicobar and Bengal fans were predominantly supplied by Himalaya-derived material. A lack of volcanic material in the Nicobar Fan rules out sources from the Sumatra magmatic arc. Overall, the petrographic data shows a progressive decrease in sedimentary detritus and corresponding increase of higher-grade metamorphic detritus up-section. Changes in sediment provenance and exhumation rates in the Himalaya are seen to track changes in sediment accumulation rates. High sediment accumulation rates in the Bengal Fan occurred at ∼13.5–8.3 Ma, and in the Nicobar Fan from ∼9.5–5 Ma. Both fans show peak accumulation rates at 9.5–8.3 Ma (but with the Nicobar Fan being about twice as high), and both record a sharp drop from ∼5.5–5.2 Ma, that coincided with a change in river drainage associated with the Brahmaputra River diverting west of the uplifting Shillong Plateau. At ∼5 Ma, the Nicobar Fan was supplied by an eastern drainage route that finally closed at ∼2 Ma, when sediment accumulation rates in the Nicobar Fan significantly decreased. Sediment provenance record these changes in routing whereby Bengal Fan deposits include granitoid sources that are not seen in the Nicobar Fan, likely due to a more localised eastern drainage that included material from the Indo-Burman wedge. Prior to ∼3 Ma, source exhumation rates were rapid and constant and the short lag-time rules out significant intermediate storage and mixing. In terms of climate versus tectonic controls, tectonically driven changes in the river network have had most influence on fan sedimentation.