Outreach: from eruptions to lockdown.

Prof Christopher Kilburn (UCL Hazard Centre) recounts the impact of COVID-19 on learning how to engage the public about evacuating from volcanoes. The case of the coastal town of Pozzuoli, taly. 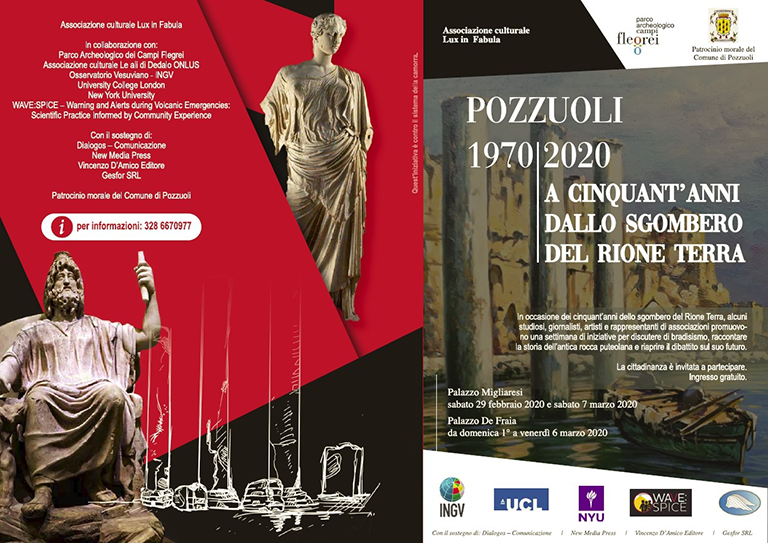 Emergency plans at volcanoes normally aim to get people away, rather than to make sure they stay put. The contrast has been highlighted this year at the Campi Flegrei volcano, on the outskirts of Naples in southern Italy. The volcano is not a conventional mountain, but a nearly circular depression about 15 km across and 200 metres deep. It is also home to more than 360,000 people.

Fifty years ago last March, the centre of Campi Flegrei saw one of the most controversial volcanic evacuations in Europe. In 24 hours, 6,000 people were forcibly removed from the coastal town of Pozzuoli. Within days, another 30,000 had moved away. The exodus was a reaction to Campi Flegrei's first signs of reawakening in more than 400 years. In the end, no eruption occurred, but, by the end of the next year, Pozzuoli had been raised nearly two metres out of the sea. A similar crisis a decade later also ended without eruption. Not surprisingly, today's public have doubts that such emergencies are a prelude to volcanic activity.

Even so, emergency unrest is expected before an eruption and, when it occurs, warnings will have no value if nobody listens. When the next emergency comes, warnings will have no value if nobody listens. To mark 50 years since the first evacuation, we joined with community associations on our WAVE:SPICE* programme to prepare a week of public events in Pozzuoli. The planned activities combined music and art exhibitions with discussions among residents, scientists and politicians, and offered an exceptional opportunity to learn how to design warnings that would catch public attention.

COVD-19 put a stop to all that. Lockdown arrived and the streets of Pozzuoli were once again emptied, but with everyone inside their homes rather than outside Campi Flegrei. Even so, we will be back with new ideas and events. When the pandemic ends, the volcano will still be there. And it will still be restless.

*Launched by the UCL Hazard Centre in the Department of Earth Sciences, the WAVE:SPICE consortium (Warnings and Alerts during Volcanic Emergencies: Scientific Practice Informed by Community Experience) is supported by community associations in Pozzuoli (led by Lux in Fabula and Le Ali di Dedalo), the Vesuvius Observatory, RADA and New York University.