A recently graduated doctoral student from our department has just published strong evidence that oxygen levels were key to early animal evolution. Dr Rosalie Tostevin (now at Oxford University) was supervised by Professor Graham Shields-Zhou in a project studying some of the world’s oldest animal-based reef ecosystems in Namibia. Over the course of her PhD, she looked at various chemical tracers of oxygen, before settling on a unique combination of iron speciation, rare earth elements and sulphur isotopes. The study has been widely reported as the first one that is able to distinguish between bodies of water with low and high levels of oxygen (not simply distinguishing oxic from anoxic waters). Rosalie shows in her work, published in Nature Communications, that poorly oxygenated waters did not support the complex life that evolved immediately prior to the Cambrian Period, suggesting the presence of oxygen was a key factor in their appearance. 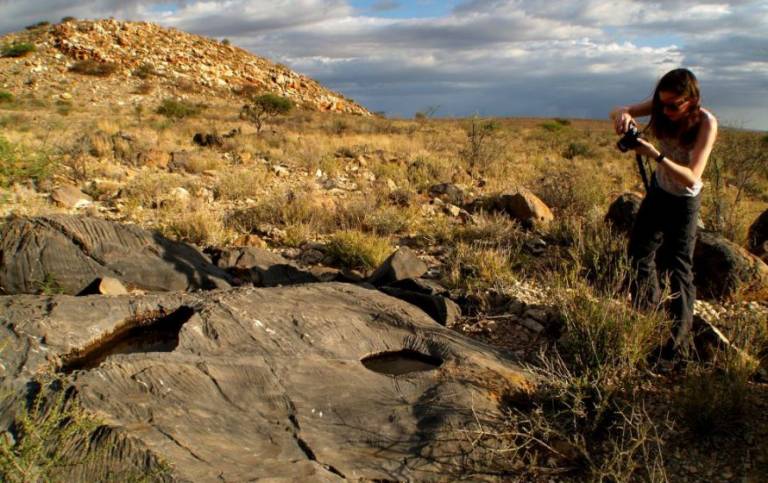 The question of why it took so long for complex animal life to appear on Earth has puzzled scientists for a long time. One argument has been that evolution simply doesn't happen very quickly, but another popular hypothesis suggests that a rise in the level of oxygen in the oceans gave simple life-forms the fuel they needed to evolve skeletons, mobility and other typical features of modern animals. To test this hypothesis, the team, including geochemists, palaeoecologists and geologists from UCL and the universities of Edinburgh, Leeds and Cambridge, as well as the Geological Survey of Namibia, honed in on the last 10 million years of the Proterozoic Eon as the interval of Earth's history when today's major animal groups first grew shells and churned up the sediment. The study provides strong evidence that the availability of oxygen was a key requirement for the development of early skeletal and motile animals. However, these well-oxygenated environments may have been in short supply, limiting habitat space in the ocean for the earliest animals.