News study: evolution of microfracture networks, and their permeability, depends strongly on temperature changes. The explosive potential of volcanoes is primarily controlled by the quantity of gas in the magma and its ability to escape. Gas can escape from solidified magma through a network of interlinked cracks, and the ease of escape in this way is known as the permeability. In a recent paper published by Gaunt et al. in Bulletin of Volcanology, studies of lava spines at Mount St. Helens volcano, have revealed that although these fracture-networks are relatively permeable at room temperature, at elevated temperatures such as those found in volcanic conduits, this permeability can be substantially reduced. This results was not expect and means that the permeability and explosion potential can change dramatically with changing environmental conditions. 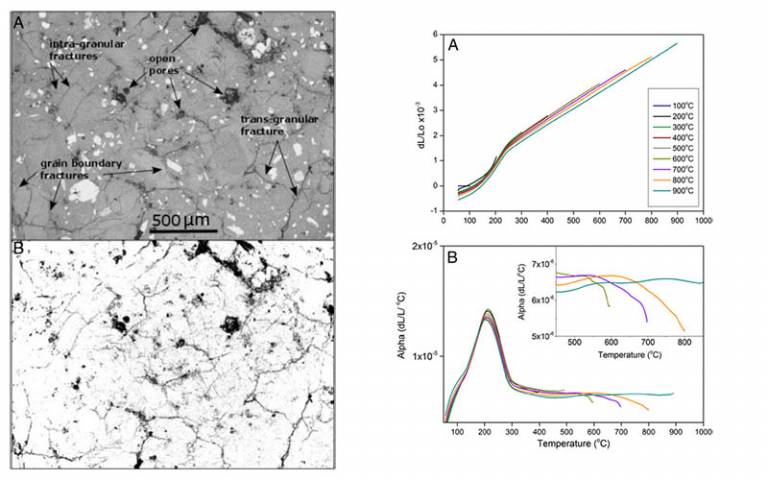 We measured permeability at varying temperatures up to 900 ºC under simulated in situ pressure conditions. This is the first time permeability to such high temperatures has been measured on rock as far as we are aware. Samples tested were extruded during the 2004-2008 Mount St. Helens eruption.

We found that the permeability was reduced by four orders of magnitude when temperature was increased from room temperature to 800 ºC and at 900 ºC, the rocks became essentially impermeable. Cyclically increasing the temperature of the rocks also progressively altered the micro-structure of the rocks leading to further decreases in permeability. These results have significant implications for the modelling of gas loss in conduits. The explosion potential of a volcanic system is increased if repeated cycles of heating occur however as cooling occurs, micro-cracks are formed which increase permeability, leading to a reduction in gas retention and therefore explosion potential.