Important insight into the complex mechanism of molecular breakup and its implications in the synthesis of new carbon-based nanostructured materials. Graphene is a wonder material, made of a single layer (one-atom thick) of graphite, and with extraordinary mechanical and electronic properties. A sheet of graphene the thickness of a cling film would require the weight of a large car to be punctured. It is transparent, and electrons can move thousands of times faster then on copper. Graphene was isolated for the first time just over ten years ago by Geim and Novoselov, who received the 2010 Nobel prize for that feat. Nowadays is produced with a number of methods, one of which is the dehydrogenation of poly-aromatic molecules, like coronene. 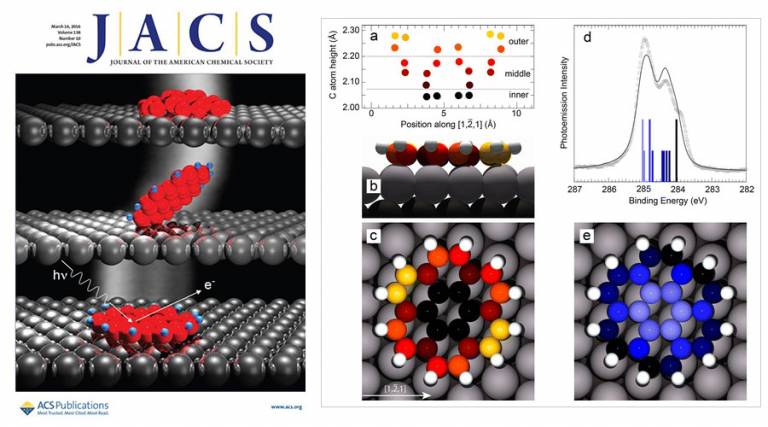 Dario Alfè and Monica Pozzo in collaboration with the experimental group at the University of Trieste, led by Alessandro Baraldi, have discovered that the dehydrogenation of coronene on the Ir(110) surface proceeds with a series of peculiar steps, in which they first tilt upwards, still keeping their planar configuration, then they experience a rotation, and at the end they gradually settle to form dome shaped nanographene flakes.

The new and complex break-up mechanism could be used for the creation of new nanostructures with different functionalities by encapsulating adatoms below the carbon dome, or to tailor new reaction pathways in combination with other molecules.