The Arctic melt season continues to lengthen as a result of trends towards both earlier melt onset and later autumn freeze-up. 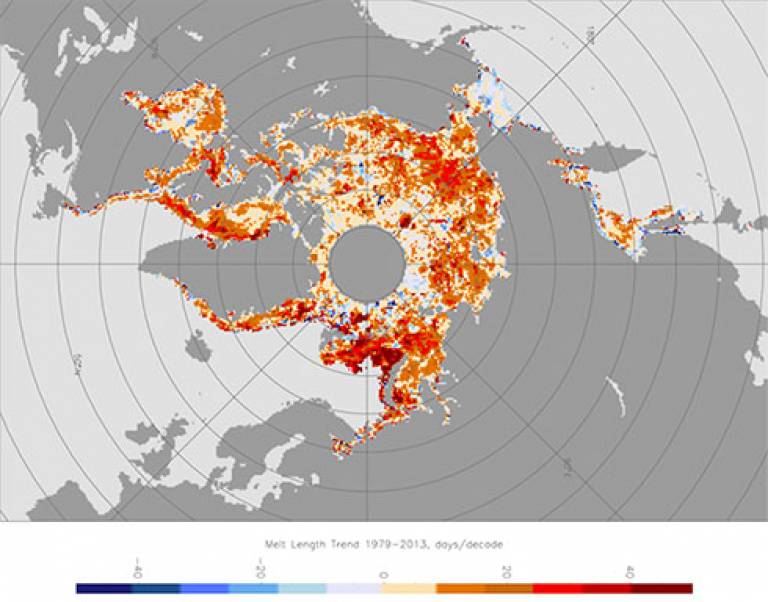 Within the Beaufort, Chukchi and East Siberian seas, regions with pronounced summer ice loss in recent years, the melt season has lengthened by more than a month since 1979 [Figure 1]. While the longer melt season is largely explained by delays in autumn freeze-up, earlier melt onset has a proportionally larger impact on the total amount of solar energy absorbed at the surface. This intuitively makes sense, as earlier melt onset leads to earlier formation of open water and melt ponds that ilower the albedo and increase the absorption of solar radiation on the ice and within the exposed open water areas. This in turn leads to warmer sea surface temperature and later autumn freeze-up. Given our calculations, the lengthening of the melt season combined with reductions in surface albedo on the order of -9% per decade have resulted in the ability to melt an additional 0.97 to 1.3m of ice over large parts of the Arctic Ocean during the last pentad (2007-2011) compared to the long-term mean (1982-2011).

Corresponding analysis of changes in sea surface temperatures suggest the additional heat stored in the upper ocean during the last decade of approximately 752 MJm-2 has increased ocean temperatures by 0.5 to 1.5oC. This increase in sea surface temperature largely explains the observed delays in autumn freeze-up within the Arctic Ocean's adjacent seas. This suggests that sea surface temperatures may have some predictive skill in forecasting timing of ice freeze-up, with important implications for regions with high industry stakeholder interest as industry has an interest in pushing the dates of operation during the summer melt season. However, ice conditions remain highly variable and early ice formation in a particular year is likely.