A most unusual history of an iron meteorite.

A fine specimen of the Cape of Good Hope iron meteorite came to Britain in the early 19th. Century. It had first been discovered many decades before and was at one time thought to be the remains of a ship’s anchor. 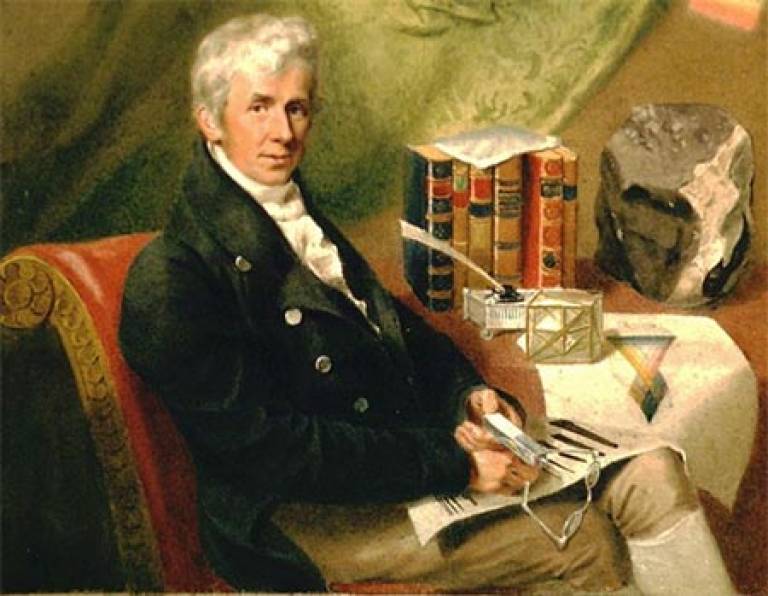 The specimen was brought to the museum of James Sowerby (1757-1822), a naturalist and one of several key players (including Sir Joseph Banks, President of the Royal Society) in determining the origin of meteorites. Disparate ideas on the causes of meteorites had included lightning, the aggregation of particles in the atmosphere and volcanic activity.  Sowerby already had the fine chondritic meteorite, Wold Cottage, in his museum and which he described in his five-volume work on British Mineralogy.   That meteorite is the largest to have fallen in Britain and is one of the Treasures of the Natural History Museum.

Figure 1. Portrait of James Sowerby. The Wold Cottage meteorite is on the right hand side.

The Cape of Good Hope meteorite is a uniform nickel-rich ataxite with 16% nickel. Sowerby decided to use some of his specimen to make a ceremonial sword to present to the Emperor of All Russias, Alexander I, at the celebrations held in London, July 1814, at the end of the Napoleonic Wars (the Treaty of Paris, May 1814). The Tsar was delighted and gave Sowerby an emerald ring encrusted with diamonds in return. Subsequently the sword was lost – a search in Russia in 1937 found no trace of it. I initiated a new search and traced it to the Hermitage Museum, St Petersburg, which I visited in March this year.

The blade of the sword is over 600mm long and still in fine condition from its high nickel content. Sowerby had placed inscriptions on the blade including “This Iron having fallen from the heavens was, upon his visit to England, presented to His Majesty Alexander Emperor of all the Russias, who had successfully joined in Battle, to spread the blessings of peace throughout Europe.”  Sowerby also featured the Cape of Good Hope meteorite in his work on Exotic Mineralogy and was able to state its origin as meteoric – something he had been unable to do about the Wold Cottage meteorite some sixteen years earlier.

My paper in the latest issue of the Royal Society Notes & Records journal describes the history of the Cape of Good Hope meteorite, the making of the sword and the details, some amusing, of its presentation and subsequent history. That unusual and rare object certainly helped to develop nineteenth century interest in the world of meteoritics.