Graphic Provocations: What do digital humanists want from visualization? 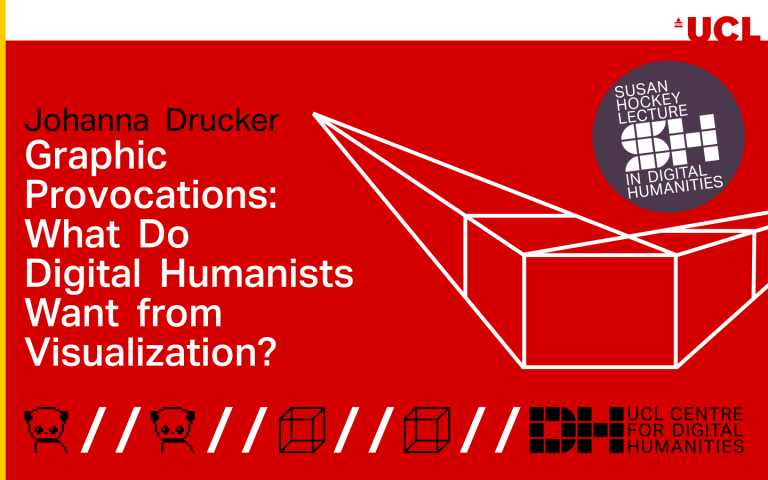 [Video of this event]

In our second instalment of The Susan Hockey Lecture series, Prof Johanna Drucker will discuss various approaches to visualization, and how these can or could be used by digital humanists.

Digital humanists have adopted visualization methods from a variety of other disciplines, but do they serve the interpretative approaches of the humanities? How might aesthetics and epistemology find common ground and build on conventions from a broader range of visual arts, architectural design, and other graphical techniques? Can we move beyond reductive approaches that turn complex historical and literary phenomena into "data" and expose other aspects of the partial, situated, and constructed character of humanistic work? This talk outlines design principles for engaging with graphical means of interpretation that extend beyond current presentational tools into analytic, speculative, and provocative approaches.

Johanna Drucker is the inaugural Martin and Bernard Breslauer Professor of Bibliographical Studies in the Department of Information Studies at UCLA. She has published and lectured widely on topics related to digital humanities and aesthetics, visual forms of knowledge production, book history and future designs, graphic design, historiography of the alphabet and writing, and contemporary art. She has held faculty positions at the University of Texas at Dallas, Columbia University, Yale University, and the University of Virginia, as well as visiting positions at Harvard University, and SUNY Purchase.

Her most recent titles include the jointly authored Digital_Humanities (MIT, 2012) with Anne Burdick, Peter Lunenfeld, Todd Presner, and Jeffrey Schnapp (just released in Italian translation, 2014); Graphic Design History: A Critical Guide (Pearson Prentice Hall) with Emily McVarish, and SpecLab: Projects in Digital Aesthetics and Speculative Computing (Chicago, 2009). A collection of her essays, What Is? was published by Cuneiform Press in 2013 and Graphesis:Visual Forms of Knowledge Production appeared in 2014 as one of the three first volumes in the new series that Harvard University Press launched in their new MetaLab series on the impact of digital humanities and design.