Female figure lying on her back

Location: Framed on the east wall of the Housman Room in the North Cloisters of the Wilkins Building.

Works like this prize-winner by Carrington resulted from the Slade's pioneering policy allowing women to draw from life.

Carrington’s reclining nude is silhouetted against a dark background, focusing the viewer’s attention on the figure. This is rendered in subtle tones, with highlights of the pink cheeks and the skilfully foreshortened elbow. Despite the painting’s careful finish, the right foot of the model is only lightly sketched, adding a pleasing spontaneity to this academic nude which draws its inspiration from the old masters.

In June 1918 Virginia Woolf described Carrington as: "... odd from her mixture of impulse & self consciousness. I wonder sometimes what she’s at: so eager to please, conciliatory, restless, & active... [B]ut she is such a bustling eager creature, so red & solid, & at the same time inquisitive, that one can’t help liking her."

While not a member of the Bloomsbury Group, Carrington was associated with them from her time at the Slade and put her own unique twist on Bohemianism and sexual freedom. Several of her Slade contemporaries – including Paul Nash, R.W. Nevinson and Mark Gertler  – were all said to have been in love with her. Her longest relationship was her platonic partnership with the writer Lytton Strachey . Strachey and Carrington set up house together, first at Tidmarsh Mill House in 1917 and then at Ham Spray House in 1924. Carrington married their mutual companion Ralph Partridge in 1921. She reputedly did this not because she loved Partridge but because Strachey did. Carrington committed suicide by shooting herself in 1932, 2 months after Strachey’s death from cancer.

Carrington was a skilled landscape and portrait painter who also worked in the decorative arts, painting pottery and murals, including the design for the library at Ham Spray House. She had exhibited paintings at the New English Art Club and designed for the Hogarth Press after leaving the Slade, but rarely exhibited her work publicly after 1916. Her private life and associations eclipsed her work and talent almost completely during her lifetime. It was only when David Garnett published extracts from her letters and diaries in 1970 that attention was drawn back to her work, and caused Sir John Rothenstein to call her “the most neglected serious painter of her time.” The balance has been redressed over recent decades, and two of her works in the permanent collections at the Tate.

Women artists at the Slade

The Slade is renowned for being the first art school to allow female students to study from the life model from its foundation in 1871, a privilege that was not extended to female students at the Royal Academy until 1894. Strict rules of propriety were observed: female Slade students drew only from female life models, male models were draped, and the men’s and women’s life rooms were separate. 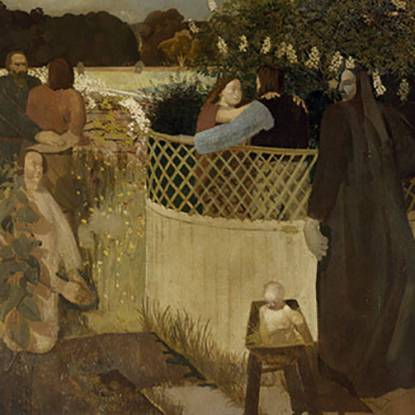 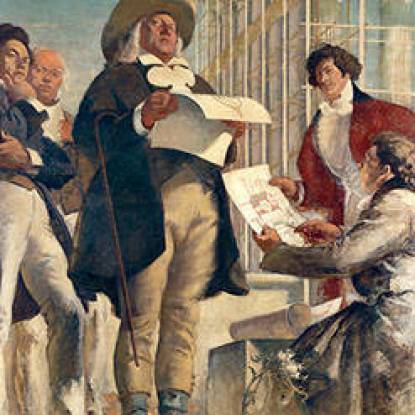 The Four Founders of UCL
A mural painted by Henry Tonks, 1923
Subscribe to our newsletter