Only a small percentage of UCL’s art collections can be displayed in order to maintain best preservation practice. UCL Art Museum offers visitors access to its reserve collections by appointment. Our collections are also in demand by scholars from across the discplines, lecturers, curators, writers, performers and artists from the UK and abroad who regularly visit the collection as part of their research and teaching practices. It is advisable to reserve your appointment as early as possible.

Access to the reserve collections takes place on Tuesdays and Thursdays between 10:00-13:00.

How to make an appointment

If you'd like to arrange a research visit to develop your research and/or an exhibition please contact us at museums@ucl.ac.uk following the guidelines on the Access tab.

Teaching with the collections

The collections are a valuable and sought-after teaching resource for academics and students at UCL across a range of disciplines. We also serve other Higher Education institutions to deliver classes, seminars and practical sessions tailored around specific themes. We regularly support the development of teaching with the collections and invite UCL lecturers to make use of the collections and the space in order to enhance their teaching.

If you're a student or academic at UCL or at another university and would like to find out more about how you can use UCL's art collections in your teaching and learning please contact the curatorial team on museums@ucl.ac.uk.

Teaching at UCL Art Museum is in high demand and in order to provide the highest standard of service lecturers and students are encouraged to book well in advance. Please get in touch with us to find out about our submission deadlines for teaching requests.

We welcome both new and existing audiences with flexible Learning and Teaching provisions for all audlt and community audiences.

Our provision for informal learning groups draws on highlights of the collections, the current exhibition and works on permanent display that are publicly accessible.

To arrange a group visit and learn more about our terms & conditions please contact our museum team on museums@ucl.ac.uk.

If you'd like to arrange to visit in advance to develop a tailored session, please make note of the guidelines on the Access tab.

UCL Art Museum holds a wide range of visual and textual resources for exploring the visual representation of the French Revolution in Britain and France. Works include both pro-revolution and anti-revolution caricature prints produced in France and Britain, such as prints of male and female sans-culottes, the destruction of the Bastille, the death of Marat and the execution of Louis XVI, portrait prints of revolutionary figures from the Tableau Historique (a series issued in instalments in the early 19th century) and a sheet of post-revolutionary bank notes. Possible themes to pursue in your teaching include history and visual culture of the French Revolution, gender and cultural stereotypes, images on material objects such as bank notes, sentimentality and whether prints can start a revolution.

This resource contains a selection of 50 high-resolution portraits from UCL Art Museum’s collections, highlighting the range of techniques, time periods, sitters and artists represented in the collections, with an emphasis on professors and students at the Slade School of Fine Art. 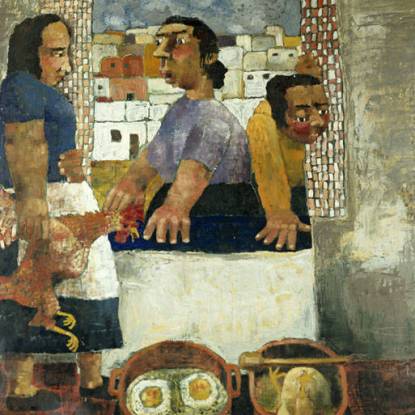 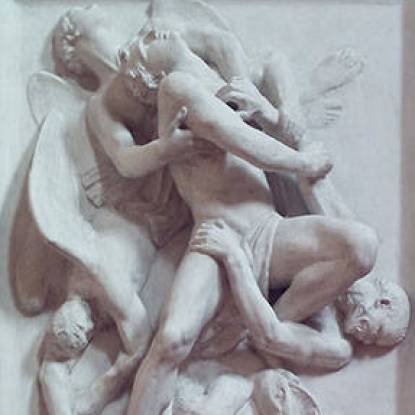 The Lord's Prayer: Deliver us from evil
Flaxman shows two angels rescuing a man from the clutches of serpents and falling demons
Subscribe to our newsletter