Take me to:
at:
Let's go
Let's go
Darwin (or) Bust
Darwin as you've never seen him before
Grant Museum of Zoology
12 February to 2 April 2014
Exhibition

A series of sculptures created using robotics, live insects and chocolate are being put on display in Darwin (or) Bust which re-imagines the iconic face of Charles Darwin for the 21st century.

Opening on 12 Feburary, Darwin’s 205th birthday, the exhibition, Darwin (or) Bust, is inspired by a classical Victorian-era bust of the naturalist that is currently displayed in the Grant Museum of Zoology.

After the bust was moved from UCL’s Darwin building in 2012, researchers from the departments of Structural and Molecular Biology and Genetics, Evolution and Environment UCL launched a competition in 2013 for students and staff to replicate the bust to fill the empty plinth on the original display site.

Using data from 3D laser scanning the Museum's bust members of the Institute of Making, a cross-disciplinary research club for the made world, which includes engineers, biologists and artists were invited to get creative, technical and messy replicating the bust in any way they wanted – be that in a hologram, out of wood, or even in jelly. Eight Darwins featured in the exhibition including works made out of chocolate, crochet and a Darwin shaped ant colony.

The new Darwin bust now housed in the Gower Street entrance to the Darwin Building a new was milled out of resin by a genuinely amazing 6-axis robotic arm and turntable called LaToyah at B>MADE, Bartlett Manufacturing and Design Exchange at UCL’s Bartlett School of Architecture.

Darwin (or) Bust was a collaboration between the Grant Museum of Zoology, the Institute of Making and UCL Structural and Molecular Biology 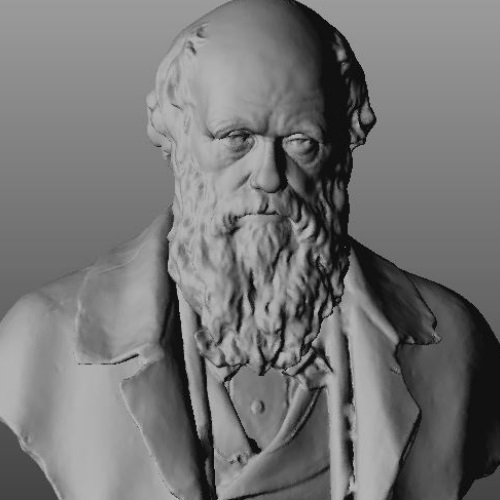