Curating Equality* is a research hub and virtual platform for interdisciplinary and collaborative research, which uncovers hidden histories in UCL’s collections and addresses their contemporary relevance. Projects undertaken to date have brought forgotten artists into the limelight, many of them women. Significantly, these projects address currencies of esteem and have uncovered women artists' relationships with peers across disciplines, as well as the conditions that made it possible for these artists to thrive. Exploration of the patterns and systems that underpin visibility and the impact of new technologies continue to inform directions for new research. UCL is well suited to exploring the visibility of women within institutional narratives and British history more widely. The university paved the way to advancements in gender equality in education and research, and was at the vanguard of co-education in art.

*The term Curating Equality was coined by Nina Pearlman and is also the title of her current research.

The suite of Curating Equality projects led by UCL Art Museum include Prize & Prejudice (2018), Instruction and Access: Women in art education (2018), The Magic Fruit Garden (2018), Disrupters and Innovators: Journeys in gender equality at UCL (2018-19), Passing In: Access and influence in higher education (2018),  Slade Sculpture Prize (2019) and Redress (2018). These projects draw on the models and methodologies of earlier initiatives focusing on diversity and inclusion, such as UCL Art Museum’s Spotlight on the Slade Collections - a curatorial research project funded by Paul Mellon Centre for Studies in British Art (2015-2018) - as well as the interdisciplinary project and exhibition, Drawing over the Colour Line (2012-13).

Some statistics to date: twenty-six women artists, eleven women from other fields and six living artists are featured across this suite of Curating Equality projects, which incorporate research from ten academics, ten students (BA/MA/PhD) and ten collections and archives.

The Curating Equality research hub has also supported peers across the university and wider sector in various affiliated projects, including the UCL Rightsholder Clearance Project and Professor Liz Rideal’s Slade Women: A Celebration, both commissioned as part of the Slade 150 anniversary.

UCL Art Museum is a valuable resource for exploring gender imbalance in the arts. Its Slade Collections span 150 years and reflect the history of art education at the first art school to admit women on the same terms as men. Slade Prizes were awarded from 1871 and retained from 1897. In the first year that prizes were awarded, three of the five winners were women and women consistently won prizes at the Slade thereafter.

The museum has helped restore reputations of artists lost in the gaps of history through ongoing research, loans and exhibitions working with cultural sector partners as well as students and academics. For instance, UCL Art Museum was the major lender to the first major retrospective of Winifred Knights at Dulwich Picture Gallery in 2016.

Curating Equality projects have enabled us to establish that 45% of the museum's Slade Collections holdings comprise of work by women artists and connect contemporary artistic practice to research in other disciplines.

What can we learn from these collections?

These collections are a valuable resource for understanding currencies of esteem and the career paths of women artists of the past, and that which connects them with their contemporary counterparts. For example, interdisciplinarity, collaboration, education, social and political activism, and public engagement – all now at the forefront of contemporary art practice – characterised the careers of many nineteenth and twentieth century women artists. And yet, the contributions of so many of these artists remain invisible, having failed to be mapped along with their influence and legacies by the generations that followed. Being able to consider the conditions that impacted the professional advancement of women artists who demonstrably out peformed their male peers in art school when the playing field was level sheds light on conditions that perpetuate gender imbalance in the arts today.

The prize-winning drawing by Elinor Monsell (see above slide) would have been one of the first to enter the museum collection in 1898 while recent additions to the collections through the prize system and other methods include work by twenty-first-century award-winning artists Sophie Bouvier Ausländer, Yvonne Feng, Lily Johnson, Sofia Mitsola, Anya Olofgörs and Marianna Simnett. These acquisitions sit alongside works by key twentieth-century figures such as Dora Carrington, Paula Rego and Ana Maria Pacheco.

The UCL Art Museum collections offer a unique record of the theory and practice of art education at the Slade from 1897 to the present day. No other art school collected in this way. Unlike other public collections, the Slade Collection was built up through the prize system and thus, the museum holds examples of work by artists before they began their professional careers – with no foreknowledge of their future position within the art world. To read more about the history of the Slade and the prize system see the exhibition page for Prize and Prejudice.

A short story about Elinor Monsell: the earliest prize-winner in 1898

Elinor Monsell’s prize-winning drawing entered the collections in 1898 together with a drawing by William Orpen. Competing under the same conditions and drawing the same model, both artists shared the first prize that year. We know a lot about Orpen, but at the time of our Spotlight on the Slade research project very little information about Elinor Monsell was available. Research conducted as part of this project revealed that as well as the prize for this work, Monsell was awarded the Slade Scholarship in 1898 and the following year, she was awarded 3rd prize equal for Figure Painting and another certificate for Figure Drawing.

Monsell returned to Ireland after leaving the Slade. She produced the first press mark for Dun Emer Press – the organisation founded by Elizabeth Yeats, and she produced a woodcut of Queen Maeve for the Abbey Theatre, which was used on the programme cover in 1904. Over a century later, this design still exists today as the theatre’s logo.  Monsell also made illustrations for children’s books written by her husband – amateur golfer, golf writer and Charles Darwin’s grandson Bernard Darwin. Significantly, Monsell taught wood engraving to her husband’s cousin, Gwen Raverat, also a Slade student, who went on to become the only female founder member of the Society of Wood Engravers.

What does Monsell’s story tell us and how is it still relevant?

Monsell's story demonstrates the importance of women’s access to the life model and exemplifies the teaching method at the Slade, where the life room was used to explore form, placing emphasis on understanding the figure, rather than producing a finished drawing (as evidenced by the corrections and sketches on the same sheet). Viewed alongside William Orpen's work, Monsell’s drawing tells us about the prize system. Only by studying the two drawings together are we able to determine that the two artists drew the same model. An article by a female student in 1883 states that male and female students ‘compete under precisely the same conditions’ using the same casts and models for the competition subjects.

Questions that arise from this research: 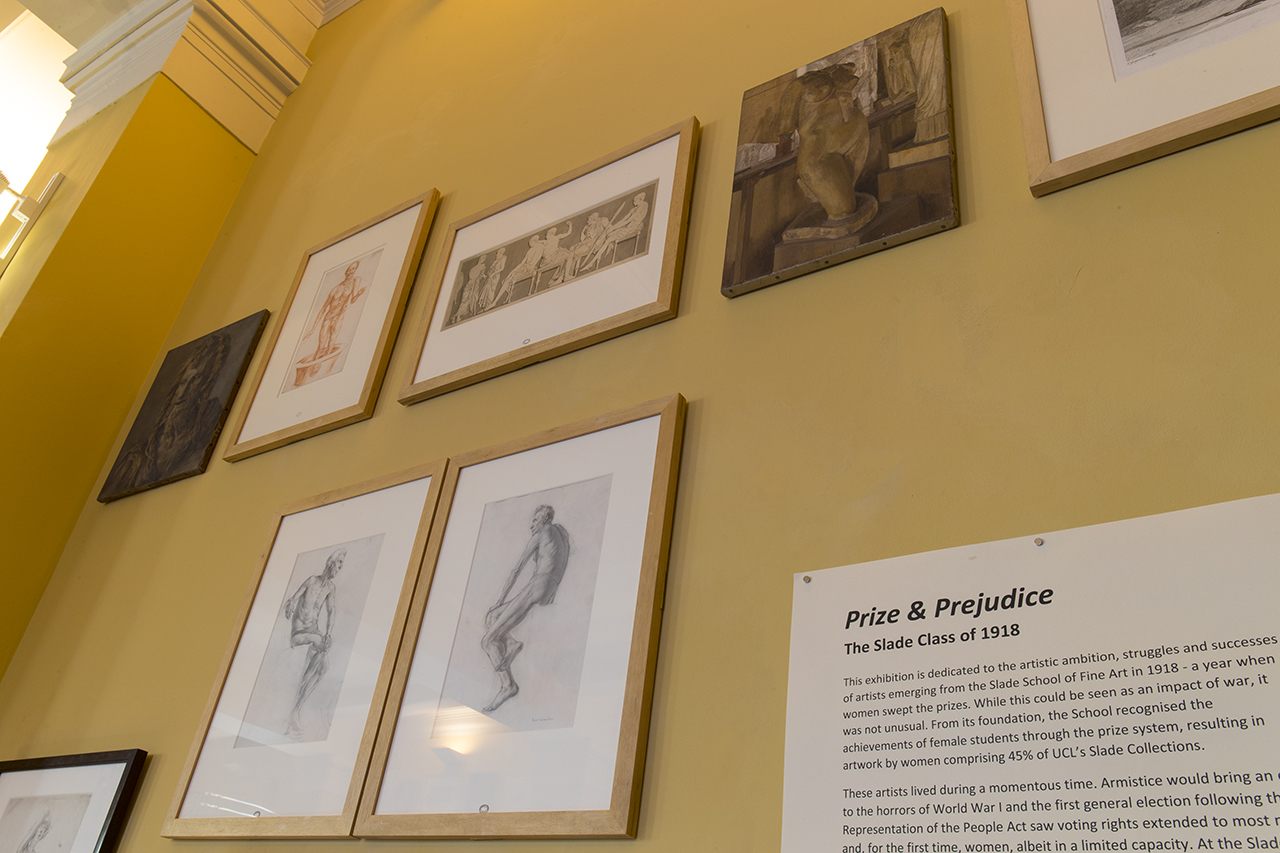