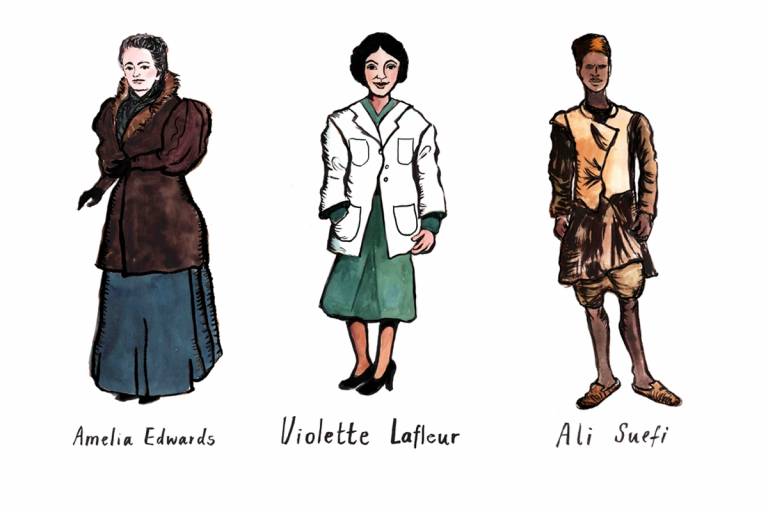 The Petrie Museum is home to one of the most significant collections of Egyptian and Sudanese archaeology in the world. Its collection tells the stories of the lives of ordinary people who lived along the Nile Valley thousands of years ago. Inside you’ll find papyrus and stone fragments inscribed with hieroglyphs; musical instruments and children’s toys; thousands of beads and amulets; ancient mummy cases and the treasures buried with them for the afterlife; and the oldest known woven garment in the world: the Tarkhan Dress.

The Museum is named after William Matthew Flinders Petrie (1853 – 1942), appointed in 1892 as first UCL Edwards Professor of Egyptian Archaeology and Philology. Over three-quarters of the material comes from excavations directed or funded by Petrie, or from purchases he made for university teaching. He was known as the ‘father of pots’ and also has a complex legacy of eugenics research.

In the Museum’s new Entrance Gallery, we are celebrating the individuals who gave a great deal to the Petrie Museum, but whose contribution has not historically been recognised. This includes writer and Egyptologist Amelia Edwards, lead excavator Ali Suefi and UCL conservator Violette Lafleur who saved the Petrie collection during the Second World War.

Amelia Edwards
Amelia Edwards (1831 – 1892) was an English novelist, journalist, traveller and Egyptologist. She co-founded the Egypt Exploration Society in 1882 which led to the discovery of temples, tombs, but also ancient settlements which tell the story of everyday life in Egypt.

After her death she donated her collections and library to UCL, along with funding to establish the first Chair in Egyptology in the UK. She chose UCL because it was the only university in England at the time to offer degrees equally to men and women.

Ali Suefi
Ali Suefi was the head-overseer of many teams of Egyptian ‘Quftis’ working to excavate Egyptian archaeological sites for Western researchers. In 1890 he began working for Petrie at the excavations at Meidum, near to the Faiyum village of Lahun where he lived and worked as a farmer and fisherman. He quickly became Petrie’s ‘right-hand man’ and oversaw excavations in Egypt for over 30 years. His name only appears occasionally in official reports however we know that he played a hugely important role in the excavations during this time.

Violette Lafleur
Violette Lafleur was a UCL conservation student and volunteer, who almost single-handedly saved the collection from the World War Two bombs that destroyed her own home. She successfully moved the Petrie Museum collections to Stanstead Bury in Hertfordshire, and to the UCL basements, with the help of college porters and former students. The UCL campus was hit by bombs during the Blitz in both September 1940 and early 1941.

She was also responsible for putting Jeremy Bentham’s Auto-icon on display. In 1939 she restored the Bentham’s remains, along with his clothes, chair and stick, so that his Auto-icon could be displayed in the Cloisters of the Wilkins Building at UCL.

We would like to thank the DCMS Wolfson Museums and Galleries Improvement Fund for supporting this project. 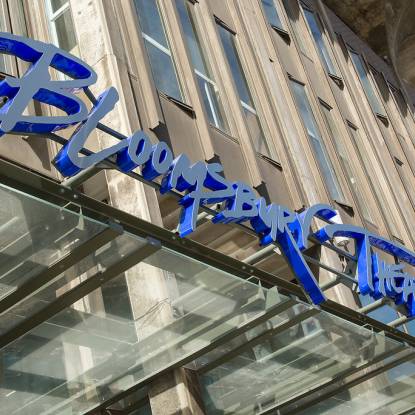 Bloomsbury Theatre to re-open
We’re pleased to announce that the Bloomsbury Theatre will reopen in Autumn 2018 following a major refurbishment.The Theatre, which prior to closure had gained a reputation in many fields, will celebrate its fiftieth year by unveiling an expertly restored, significantly upgraded venue.This represents an exciting new chapter for UCL Culture, who manage the Theatre, enabling them to open their doors to more students, commercial users, academic and creative partners than ever before.The project is a collaborative enterprise with UCL Culture and UCL Estates as part of the Transforming UCL programme, the largest capital programme in the university’s history which involves the investment of £1.2 billion to upgrade and expand UCL’s accommodation and facilities.[[{"fid":"3033","view_mode":"xl","fields":{"format":"xl","field_file_image_alt_text[und][0][value]":"bloomsbury_theatre_architects_plan.jpg","field_file_image_title_text[und][0][value]":"Sectional perspective, Bloomsbury Theatre Re-development plan. Credit: Nicholas Hare Architects","field_caption_heading[und][0][title]":"Sectional perspective, Bloomsbury Theatre. Credit: Nicholas Hare Architects","field_caption_heading[und][0][url]":"http://www.nicholashare.co.uk/","field_caption[und][0][value]":"%3Cp%3ESectional%20perspective%2C%20Bloomsbury%20Theatre.%20Credit%3A%20Nicholas%20Hare%20Architects%3C%2Fp%3E","field_caption[und][0][format]":"limited_html","field_float_left_right[und]":"none","field_file_image_decorative[und]":"0"},"type":"media","field_deltas":{"1":{"format":"xl","field_file_image_alt_text[und][0][value]":"bloomsbury_theatre_architects_plan.jpg","field_file_image_title_text[und][0][value]":"Sectional perspective, Bloomsbury Theatre Re-development plan. Credit: Nicholas Hare Architects","field_caption_heading[und][0][title]":"Sectional perspective, Bloomsbury Theatre. Credit: Nicholas Hare Architects","field_caption_heading[und][0][url]":"http://www.nicholashare.co.uk/","field_caption[und][0][value]":"%3Cp%3ESectional%20perspective%2C%20Bloomsbury%20Theatre.%20Credit%3A%20Nicholas%20Hare%20Architects%3C%2Fp%3E","field_caption[und][0][format]":"limited_html","field_float_left_right[und]":"none","field_file_image_decorative[und]":"0"}},"attributes":{"height":"747","width":"1200","class":"media-element file-xl"},"link_text":null}]] This cutting-edge revamp will give student societies and productions the full benefits of a 21st century theatre and create the opportunity for collaboration between academics, artists, performers, directors and companies.Originally built in 1968 to support student activity at UCL, the closure inspired a revaluing of the Theatre’s role in student life and the need to ensure its survival into the future.A key aim of UCL's Education Strategy is to provide high-quality opportunities for students to develop and learn outside their academic programmes. The newly refurbished Bloomsbury Theatre will be an excellent platform for these activities.The programming has also undergone a refresh, mixing research-driven, innovative, co-produced content with curated commercial activity from live comedy to music.This will include a range of shows and events inspired by the theme of performance=knowledge. Exploring how academic knowledge and data are bought to life using the techniques of stagecraft, theatre and the performing arts (read more about this and our other Manifesto themes in the UCL Culture Manifesto).The Bloomsbury Studio, which opened in 2015, has already become a popular, live performance venue and will continue to host a packed programme of events.We’ll be tracking the project as it happens with updates on @UCLCulture on Twitter and on the UCL Culture newsletter. So don’t forget to follow us.A press release about the Bloomsbury Theatre re-development project is available to download here.
The Engaged University: turning words into action
We are very pleased to be able to share “The Engaged University: turning words into action” report and accompanying resource pack.Jointly commissioned in summer 2019 and subsequently co-authored with our friends at the National Coordinating Centre for Public Engagement (NCCPE), the aim of the report was to explore, in conversation with colleagues in 30+ universities in the UK and internationally, the state of play in strategic support for public engagement. What this report offers is a snapshot in time. Significantly, this was the state of the art in university public engagement ‘pre-Covid’. Nevertheless, we think it is a snapshot which provides a very timely set of reference points for rethinking our future engagement practice post-COVID. It highlights the challenges and limitations in the current system and points to practices outside Higher Education which we should learn from. We hope it provides a useful platform to inform the step change in public engagement which is now required. It has certainly informed our development of the new UCL Public and Community Engagement Strategy 2020-2027 due to launch early in 2021.The Resource Pack is intended for use alongside the report and has been put together to signpost the case studies and good practice that we could not include in the report. It is intended to help those within HEIs who are making the case for public engagement who may wish to tailor the report towards their own institutional context and drivers.Download the resource pack. (PDF)Download the full report. (PDF)Read an associated article where Julia Unwin and Vivienne Parry ponder how universities will consolidate their civic role, despite the challenges society is facing.Documents are PDF but if you need the documents in another format please email us to let us know.
Subscribe to our newsletter