Why are some people taller than others?

You are quite right that is a big puzzle.

You will have seen in your class that children of the same age aren’t the same height. And you might have seen that your mum and dad are not quite the same height too. And all the ordinary folk in the street.

And maybe you’ve heard of people who have very sad diseases that make them either really tall or really really small? I heard that the smallest human ever recorded was no taller than the foot of the very tallest person who ever lived… That’s kinda weird, I think.

But I guess this weird stuff is more about illness and the odd case. Even weirder – or more interesting at least - is that people in Holland are today, on average, more than 35 centimetres taller than the average hunter-gatherer tribesperson living today in the Congo rain forest. There the average height of an Efe person is about 150 centimetres.

So, as you ask – why are people not all the same height?

I’ll try and give you a straight answer, but the most important thing I’ve learnt trying to answer your question is this: your simple question does not have a simple answer! All scientists know that humans end up with different heights today and over history the normal height has changed lots of times. We even know that very early humans – our hunter and gatherer ancestors – were much taller than their settled descendants who became farmers about fifteen thousand years ago.

But what is really amazing is that we don’t really know all the reasons for these differences. We can’t fully explain the patterns that we see. Scientists are still trying to work it out….

But think for a moment about what this means!

Height is such a simple thing. If we can’t explain why people have different heights how come we think we can explain other differences so easily, like why some people live longer, or are better at maths, or can run faster than others?

Still, I don’t want to say that we don’t know anything! Here’s the short answer to your question:

Take a look at the two maps here. They show how tall women are in different parts of the world. The first one is from 1896. That’s nearly 130 years ago. The darker the colour on the map, the taller the women living in that place. The second picture is from 1996, one hundred years later. What’s the difference? 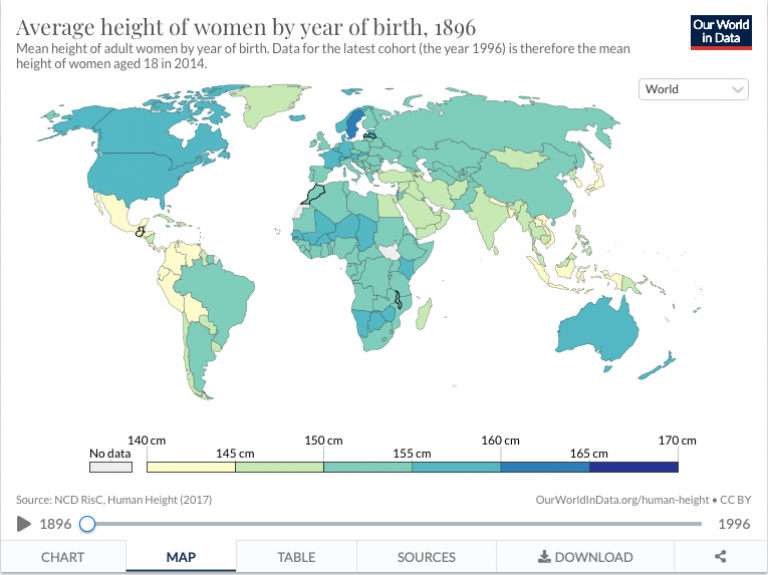 I guess you can see that the second map is a lot darker? Especially the countries up top on the right – we call that area Eurasia.

And if you look at the ‘colour code’ at the bottom you see that the darker the colour, the taller the folk.

And I guess you can also see that the whole world got darker? That means that people all over the world all got taller.

So, how did that happen? How come people all over the world got a whole lot taller in just one hundred years?

The simple truth is that people got richer and cleverer and healthier in the past one hundred years. And that means that we eat better food – full of proteins that we need to grow tall. It means that doctors treat childhood diseases better than we ever have done before.

A hundred years ago, if you were a six year old and got the Measles, your natural ‘growth spurt’, which kicks in when you are about 6 years old – would have gotten cramped and you might never have reached your normal height. Today we all take the measles vaccine and so we all grow taller.

It's those kinds of differences – what you eat, how ill you’ve been, that make a big difference. But also of course your mom and dad – how tall are they? Another famous UCL scientist, who lived about 150 years ago, showed that we all inherit our parent’s height. So it’s not just about diet and medicine…. But that’s a story for another day.

Your question was really simple. What I learnt, when trying to give you an answer, is that there is so, so much we still don’t understand. Even about the most simple things – like why am I taller than my sister!

If this kind of thing still interests you in ten years time, you should think about coming to study at a university like UCL. We are always looking for new students, people like you, with good, simple, (but, secretly, really difficult!) questions.