Pt. 3 Could quantum gravity particles be made of antimatter, and travel in ways we can't understand?

This question has been split into three main parts, each exploring some of the most important revelations in modern physics. Part 3 brings all about bringing concepts together... 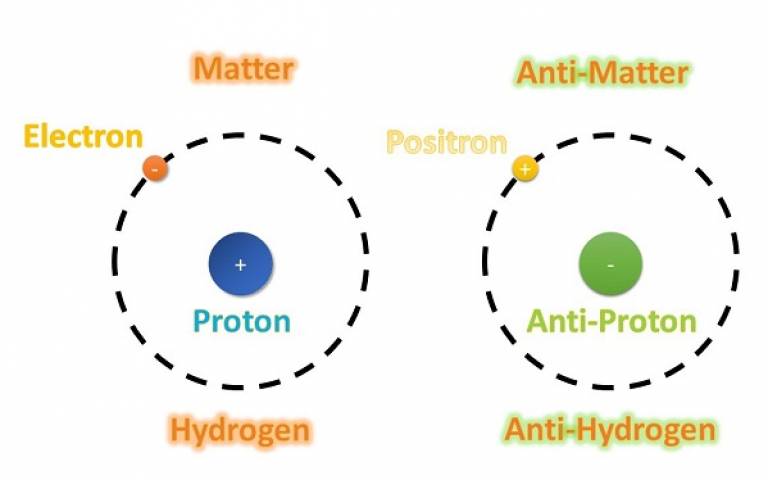 Having glimpsed at Quantum Mechanics and Relativity, what happens if you try to bring them together.

So far we’ve seen in Part 1 how Quantum Mechanics works on small scales (about the size of an atom), and in Part 2 how Gravity works on larger objects (bigger than atoms) finding out how they both work across all scales is what any theory of Quantum Gravity tries to explain. One of the most promising lines of enquiry suggested by String Theory is that the universe, instead of being simple space-time or 4 dimensional as Einstein proposed in Special Relativity, could be 10 or more dimensions.

From here on in it is difficult to guess what future physicists will be able to tell us about how the Universe works.  There was an early hypothesis that a mirror-universe could exist, just like our own universe but made entirely of something called antimatter.  Antimatter sounds like science fiction, but it does occur in nature, first predicted by British physicist Paul Dirac in the 1920s and discovered in experiments on cosmic rays soon after.
Dirac used Special Relativity and Quantum Mechanics to calculate that an electron, a fundamental particle that surrounds the protons and neutrons found in the nucleus of an atom, can have positive and negative solutions. Dirac, at first puzzled by this, suggested that a mirror-electron could exist. We now call this anti-matter.

On a simple level, every particle has a partner that is the same but with opposite charge.  The antimatter equivalent of an electron (with a negative charge) is the positron (with a positive charge). They share the same mass and other properties almost like mirror images of each other. The way to tell charged matter and antimatter apart is that in a magnetic field they will travel in opposite directions.  We can create antimatter in small quantities in particle colliders like the Large Hydron Collider (LHC) and by slowing antiparticles down, in something known as a trap. We can even create anti-hydrogen, an atom made of an anti-proton and an anti-electron (a.k.a. a positron).  However, when matter and antimatter touch they annihilate each other so it’s not easy to keep antimatter for long periods of time. However, as they seem to have the same mass they are affected by gravity in just the same way as normal matter is (see Part 2).

One of the big outstanding questions in physics is where did all the antimatter go after the Big Bang at the start of the Universe some 15 billion years ago.  Physicists working at the LHC are only just now discovering some other tiny differences in the way some matter and antimatter behave.  That is why there are teams of people studying antimatter. Any discoveries will involve many imaginative thinkers all talking to each other to solve the mysteries of the Universe.

After bringing together parts of seemingly different physics fields we have come to an answer that antimatter moves just like normal matter when it comes to gravity. However, Quantum Gravity is not yet understood in any detail, notice that Dirac used Special Relativity not General Relativity so did not include gravity in the calculations. Combining all the fundamental forces into one single Grand Unified Theory is something that many physicists work on. We are getting closer, however, it probably won’t be a single giant leap but many smaller and imaginative steps by lots of creative individuals that make progress.  One of the things I love about physics is that like a jigsaw puzzle it has many pieces and when they fit together, often in surprising ways, they nearly always create a picture that is simple and elegant.

You can also read part 1 and part 2 of this response in Your Questions Answered.