Pt. 2 Could quantum gravity particles be made of antimatter, and travel in ways we can't understand?

This question has been split into three main parts, each exploring some of the most important revelations in modern physics. Part 2 is all about Gravity... 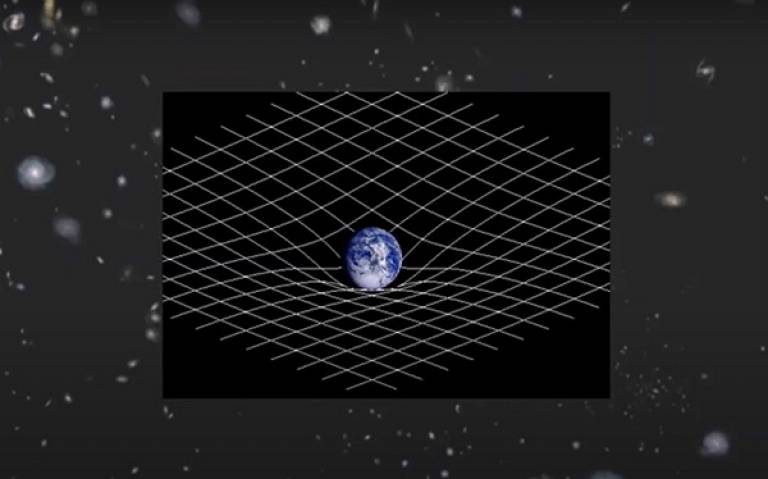 Gravity is everywhere in the Universe.  It pulls galaxies together, keeps planets orbiting stars, and pulls apples to Earth.

In the 17th Century, Newton and his Laws of Motion may have been able to tell us how fast an apple will fall from a tree, but it tells us nothing about how gravity works. That would have to wait until another physicist, Albert Einstein, with a creative way of thinking about the Universe and the Theory of General Relativity, published to the world in 1915.

General Relativity tells us that space-time is curved by mass and the more massive the object the more space-time is curved. Think of a net with a heavy object in the middle.  Any object on the net will roll downhill towards the centre of mass.  The more massive the central object the more it will bend the net, and the greater the force that will be exerted upon the surroundings.

You can experiment with this yourself with some fabric, a few family members to keep the cloth tight, and some spherical objects of different mass. With something massive (literally lots of mass) like a watermelon in the middle try rolling a marble across the fabric. The path of the marble will bend, if it has just the right amount of speed you can get the marble to do a complete loop, otherwise known as an orbit. If you had no friction slowing the marble down you can imagine the marble constantly orbiting the central mass. Scientists call this a model, something that physicist like to do to make a complex concept simpler, in this case, a planet orbiting a star, or the Moon orbiting the Earth.

You might be able to predict what would happen if you made the central object more massive.  Try it and see if you are correct.  What happens to the path of the marble as you change the speed you roll it at?

The more mass the central object has the steeper the slump in the fabric will be, this is known as a gravity well.  To get out of the gravity well the marble will need more speed, and this is known as the escape velocity.  So what happens when you get a really heavy mass, something small and dense like a cannonball modeling a collapsed star, many times the mass of our Sun.  Well even light, the fastest thing we know of, isn’t fast enough to escape the gravity well of these objects known as Black Holes.  That is why they are black, any light that falls in the gravity well never has enough speed to escape and is trapped forever.

To learn more about how General Relativity can help predict the fate of the Universe watch this video created by students film makers in the UCL Physics and Astronomy department.

Now we know something about how gravity effects the motion of objects. Part 3 briefly looks at antimatter and the impact of quantum gravity to help answer the question…