How does a remote control work the TV?

TV remote controls have an LED light in them which flashes really quickly to emit a message which is then picked up by the TV.

Have you ever seen one of those old films where people are communicating messages by flashing lights at each other using morse code? TV remote controls work in a similar way but using a type of light called infrared (or IR for short). The remote control has an LED light in it which flashes really quickly to emit a message which is then picked up by the TV. The remote is called the transmitter, and the TV is called the receiver. But how do you send a message like “turn on the tv” with a light? All computers work by switching things on and off in patterns - which may sound like a weird idea - but at their heart, computers speak in binary, or 0’s and 1’s. So our remote control is emitting a signal in a special sequence of 0’s and 1’s. It does this by turning the light on and off. For example, the code for “turn up the volume” in the example below is a series of light flashes for volume up followed by a special code for the type of TV being controlled. The time between the flashes dictates if a 0 or 1 is being sent. 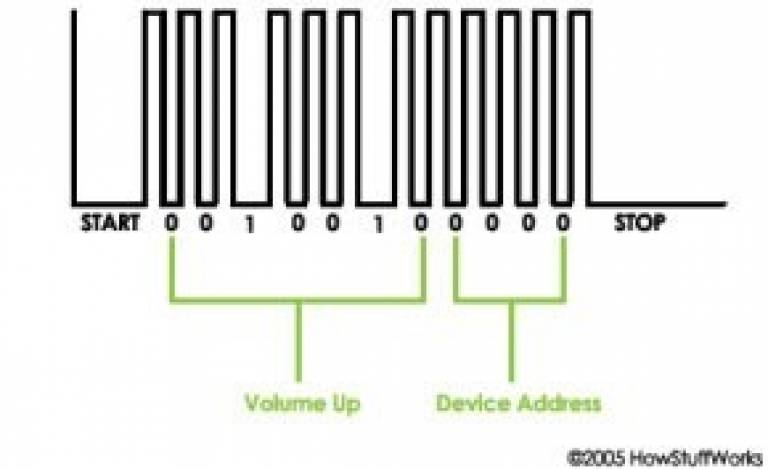 “Volume up” example for a Sony TV. Image credit: How it works.

Infrared light is pretty cool since we cannot see it if we look at it directly, so how do you know that I am telling the truth about this magic light called Infrared? You can do a quick experiment to prove to yourself that there is a light in the end of your remote. You will need a TV remote control and a digital camera (for example a phone camera). Turn the camera on and point it to the end of your remote control and press any button. Can you see an LED light up? You may even see it flashing. If you can’t see the light, but can turn on your TV, then your camera may have something called an IR Filter which is stopping the IR light going to the camera. If that is the case try a different camera. Image: LED is glowing purple when I press the power button on the controller - I had to use the front facing camera for this to work on my phone.

If you have more than one remote control in your home you may now be wondering why your TV remote doesn’t turn on your stereo or the neighbours TV. There are a couple of reasons. The first is “line of sight” - the transmitter is flashing a light at the receiver which means that if something gets in the way like a wall or a cat, then the message is not received. That is why we have to point the remote control at the TV! Why not experiment with the different angles you need to point the remote at the TV, or see how far away you can go before the TV doesn’t respond to the controller.

The second reason is that different companies use different codes for controlling their devices. So a remote control to turn a stereo volume up would use a different code to turn a TV volume up. However, if you were feeling a little mischievous you could use a device like a TV-B-Gone® which is a universal remote that can turn off any TV since it has all the codes built into one device!

But I have made a big assumption here, what if your remote control doesn’t have an LED in the controller? Many modern TV’s have started using a technology called Bluetooth to send messages. They work the same way as the Infrared remotes but instead of sending light pulses, they send the codes to the device via radio waves. It’s a bit harder to “see” these messages but they are travelling through the air in the same way that music is transmitted to Bluetooth headphones. Or maybe you have a voice assistant and control your TV by your voice - but that is a different story!

So, now that you know how an IR TV controller works, can you think of other devices you would like to be able to control with a remote?