How do you get tuberculosis?

To start with, we need to know what tuberculosis actually is!

The disease, also known as ‘TB’, is caused by a type of bacteria that likes to live in people’s lungs, and sometimes other organs. Bacteria are single-celled organisms that live in every habitat in the world, from the bottom of the ocean, to the desert and even the ice of Antarctica. Some have adapted to live inside humans and animals, and whilst some are ‘friendly’ and important to keep our bodies healthy, others can make you sick! The tuberculosis bacteria can make people very sick. It loves the nice warm, damp environment in human lungs, protected from the outside world! Unfortunately, if there are tuberculosis bacteria in someone’s lungs, it can cause them to have a cough (sometimes with blood), fever, weakness and weight loss. If they have tuberculosis for a long time, then it can make them very sick, and some people can die from it. Luckily, there are drugs that can treat tuberculosis. The picture below is a microscope image of the tuberculosis bacteria. You can see that they are rod-shaped! 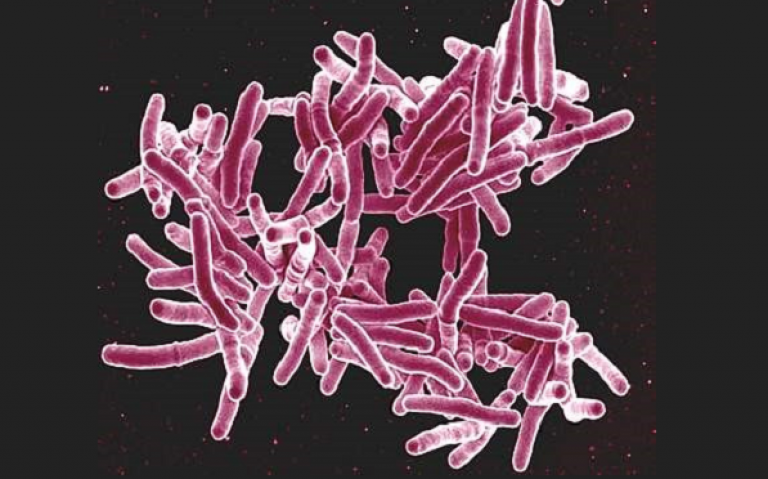 This video on YouTube explains what the tuberculosis bacteria is.

So how do you get tuberculosis? One of the symptoms of the disease is lots of coughing. This is because the bacteria wants you to cough them up into the air around you, so that they can be inhaled by another person and start growing in their lungs, keeping the cycle going! This is known as ‘airborne transmission’. Because the bacteria need to come out from inside an infected person’s lungs or deep in their throat, it needs the coughing action to get out! Because of this, tuberculosis can’t be spread by shaking someone’s hand, sharing food or drink, touching clothing or toilet seats, sharing toothbrushes, or kissing. Because tuberculosis travels through the air when somebody coughs, it can only be transmitted to people close by the infected person, so people with tuberculosis are most likely to spread it to people they spend time with, such as family members, friends or schoolmates.

The Centers for Disease Control have made a video that shows how tuberculosis is spread.

Tuberculosis used to be very common in the UK (so common during the Victorian times that they built special hospitals just for tuberculosis patients). Most people knew someone who had it, in fact, my great grandmother died of tuberculosis in the 1940s. Thankfully, it is relatively rare now (most cases occur in London). This is because of a number of things:

These measures reduce the risk of transmission of the bacteria from person to person, either by reducing people’s contact with other people, or reducing the length of people’s infections with tuberculosis.

This isn’t the case with all countries though. In 2019, 10 million people became ill with tuberculosis. Two-thirds of all tuberculosis cases happen in just eight countries: India, Indonesia, China, the Philippines, Pakistan, Nigeria, Bangladesh, and South Africa.

Read some facts about tuberculosis from the World Health Organization.